Tom and I have grown tired of the heat in Washington State so we decided to take the girls on a side trip to Bavaria. I know this seems crazy but it was 101 degrees and they are calling for 103 by Saturday, so the Bavarian Alps sounded wonderful. 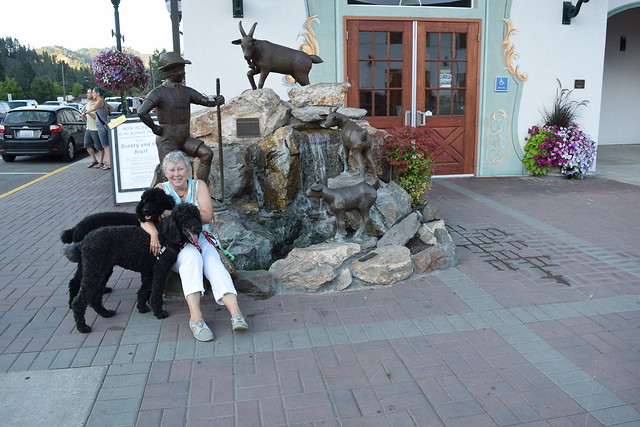 Ok, so it's not Bavaria. It is Leavenworth, WA a small city located on the east side of the Cascades. Back in the 1940s and 50s, Leavenworth was on the verge of disappearing, its main employers, the railroad, and the timber industry had left town. They needed a new source of income.
There was a short growth in the ski industry that did not last. Then a few men build Swiss themed motel. By the mid-60s the town officially decided to go Alpine with a Bavarian motif. With the soaring mountains surrounding the town and the Alpine-style buildings, it is easy to believe you are in Bavaria. It now hosts a series of festivals and is flooded with tourists.
Tom and I walked around town for a few hours on Wednesday, tasting the variety of unusual foods offer by stores and browsing the shops. Most offered standard souvenirs behind their Bavarian storefronts but there were a few unusual ones. We enjoy the music box store, the cheesemonger and the chocolate shop most. There were flowers everywhere and they were beautiful!
Returning to the RV, I gave the girls a much need bath, then fluffed and brushed them. Next was dinner at a beer garden we had spied that allowed dogs on the patio. They were very good, only mooching a bit of bread from the table. More that the bread, they reveled in the attention they drew from passersby on our walk around town.