Tom and I have been on some astonishing scenic roads in the past few years but the drive up the Oregon Pacific Highway ranks in the top few. Beginning in Brookings, a lovely seacoast town, our first stop was for a night at Bandon by the Sea. Brandon had a quaint old town section full of shops, bars, and restaurants that we, with the girls, enjoyed exploring. Having skipped lunch we decided to try some Irish Apple cider & calamari at a little outdoor bar. The Magnets Cider was excellent and the calamari good. The local fishermen were busy on the town dock bring in a variety of fish and crabs. Taking the girls home we when back to the docks to share some fish and chips before turning in for the night.
Leaving Bandon the 101 first wandered through the forest and small towns, close to the shore then moving inland, before coming out on the cliffs at Seal Caves to a spectacular view of the cliffs and ocean below. Seal Cliffs segway into Cape Perpetual. Amazing, spectacular, awesome, once again the superlatives do not seem sufficient to describe the scenery. Riding in the motorhome, we were only able to steal glances over the cliffs, too big to enter the pull-offs. 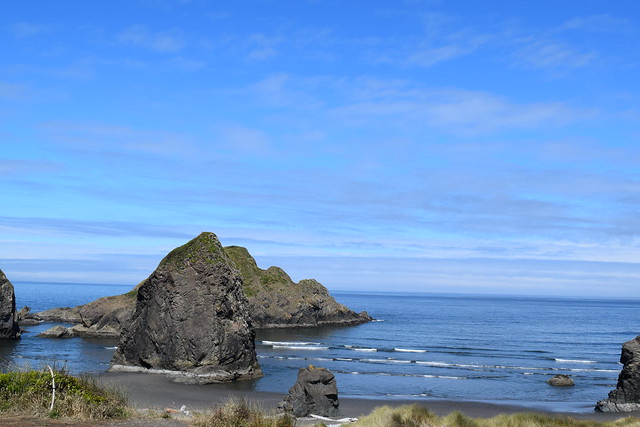 We did have one problem, our GPA, set for the size of our rig, kept warning us of an obstruction ahead and trying to route us east to I5, about a 200-mile detour. Yet we continued to see big rigs passing us going south. Convinced the GPS was wrong we soldier on until we came to the “tunnel". Clearly labeled 12.5’ to our 13’ and no place to turn around! There we sat for a moment until Tom exclaimed: “at the shoulder!" 14’ in the middle! We fit! On we went to our destination at Newport. 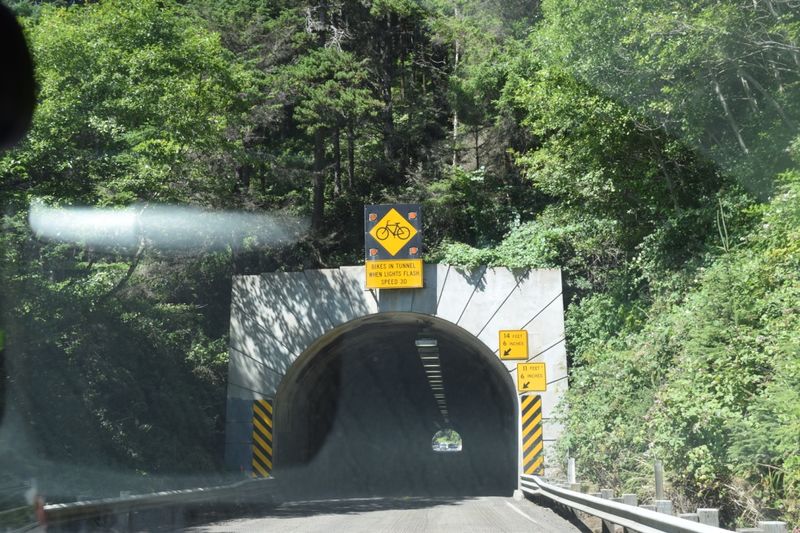 The Port of Newport Marine and RV Park was located in South Beach across a towering bridge from the city. Arriving in the early afternoon we immediately unhitched the truck, took the girls for a walk, then the four of us went south again to stop at all of the vistas we missed on the way north. As I have said so many times, there are no words to describe. We enjoyed 3 or 4 hours of exclaiming at the scenery.
I would like to comment on the many bridges we crossed on our journey north. Those over major rivers had a certain similar look to them, all were clearly from the 1930s marked by their Art Deco designs. All were designed by Conde McCullough, head of the Bridge Division of the Oregon Department of Transportation. McCullough believed bridges should be built with “economy, efficiency, and beauty". His bridges built in the 1930s and still in use today fulfill his beliefs. The Newport Bridge, on the National Register of Historic Places, was built with funds from the Works Progress Administration a New Deal Program.
After our travels and sightseeing, we sought out sustenance. Nye Beach, the old time beach of Newport, had a variety of tasty sounding eateries. We chose “Nana’s Irish Pub" and we were glad we did. They served the excellent Merger’s Irish Cider we had imbibed in Bandon in addition to a varied of Irish pub food. I had the Steak and Guinness Pie while to Tom when for the Ruben, both excellent, followed by Irish coffees. A beautiful sunset over the ocean to capped the evening!
A short walk from our campground is the Newport Aquarium where we spent several hours. We particularly enjoyed their small tide pool tanks. All of the little creatures that inhabit the tide pools were easy to view. Outside the sea lions, seals and otters entertained with their antics. It was an enjoyable morning for us both.
Also located within walking distance was the Rogue Brewery and Distillery. Starting in 1987 a brew-pub, Rogue has grown to an internationally recognized beer. They offered a tour of the facility that included 2 beer tastings and a shot of one of their spirits at the distillery. The tour was interesting, the beer excellent as was the shot of VooDoo Bacon/Maple Vodka. We purchased a few bottles for ourselves and a few for Steve.
When on the coast it is always tempting to try a whale or dolphin watching sea adventure. So early the next morning we were on the dock of Marine Adventure Tours to try to find whales. It was a cold morning but the wind had dropped off from the previous day, that meant the ship would go out to sea but first they dropped 2 crab traps in the river to retrieve on our way back. The ocean was quite rough, bouncing the ship, that had seemed pretty big in port, around like a cork. Holding on with both hands was a good idea. Before long the caption announced “spouts off the bow". Sure enough, there were several whales, easily visible. We could see their backs and tails as they moved through the water. Very exciting! We also spied several sea lions and harbor seals along with a lone Bald Eagle posed on a rock. Back in the river, the crab traps were pulled in to reveal several crabs in each. We all got a chance to hold one while the expert explains “all you would want to know about crabs". Then all went back to the river. 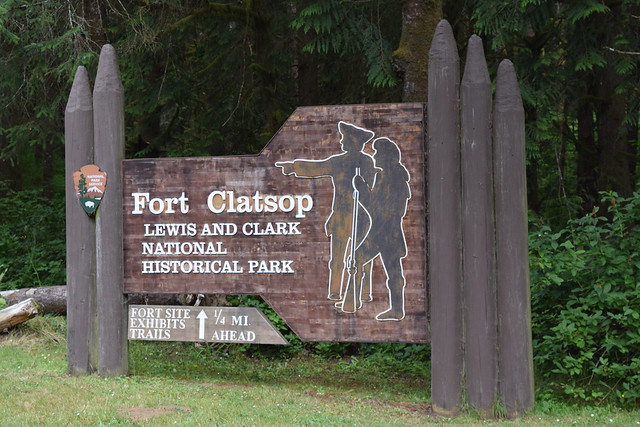 Not having enough of the Irish fare, were went back to Nana’s for dinner then out to the Yaquina Point Lighthouse for sunset. Once again our Seniors’ National Park Pass got us in free but it was so cold and winding that we retreat to the RV for the night. 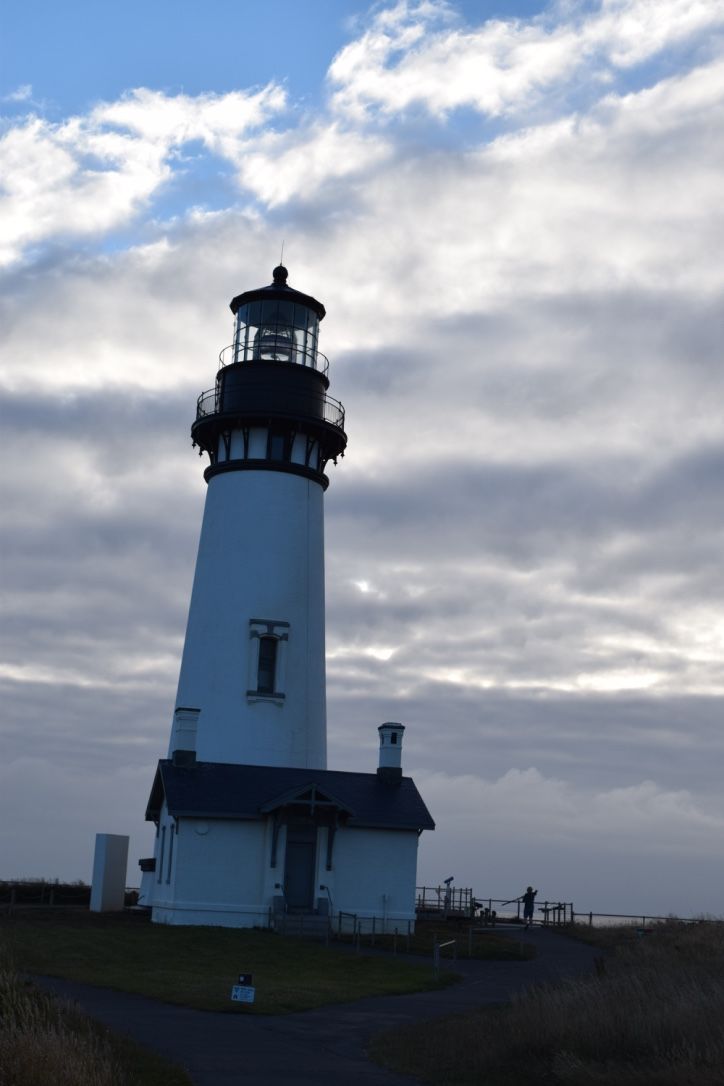 Our last leg of US 101 took us again through some beautiful sights. Going inland the road took us through forests, then back to the shore, around deep bays and up and down the mountainsides. Although beautiful Tom had his hands full handling the rig.
Our first stop of the day was at Tillamook, a large dairy farming region, and Tillamook Cheese. We had been enjoying Tillamook ice cream since our stop in Burns so we knew we would stop for the tour. The place was jammed! After the self-guided tour of the cheese making facility, they offered tastings of their cheese, a shop selling cheese, ice cream, and other delicacies, next was the restaurant featuring their excellent cheeses in a variety of sandwiches and finally the ice cream shop. Yum!
We each devoured our large, should I say, giant, toasted cheese sandwiches. Purchased several packs of cheese and 3 half gallons of ice cream then indulged in a “small" scoop in ice cream before retreating to the RV. We should have walked a few miles to work off all of that food!
Off again up the road, we passed through a series of beach towns, Cannon Beach, and Seaside being the most famous, then our stop for the night at the Astoria KOA. Sunday morning found us ready to visit Lewis and Clark.
Actually to visit Lewis and Clark’s Fort Clatsop, their winter quarters in 1805-06. Located in the Lewis and Clark National Historic Park, the fort is a replica. Although rough, the fort provided the men of the Corps of Discovery snug quarters for the winter. In addition to the fort, the park's small museum provided interesting information on their lives while here. We wander the various trails then returned to water the dogs before looking for the Corp’s Salt Making Site in Beautiful Seaside.

Salt was a necessity for preserving food, especially meat. A small group of men was assigned to salt making 20 miles south in what is now Seaside. Using 5 large buckets over a stone fireplace they worked from January 1803 to March to boil down the seawater. The site is preserved, a small square amongst seaside homes. Seaside is a charming little town nestle against the beach, the homes facing beach reflect the early 20th century when they were built. We wander for a while to take in the atmosphere. 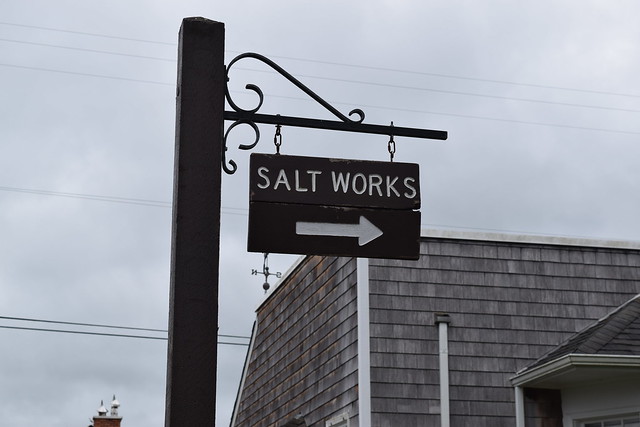 On southward is Cannon Beach, home of the Haystack. The Haystack is a 235-foot sea stack rising up on the beach surrounded at low tide by tidal pools and sightseers. No words can describe this monster. 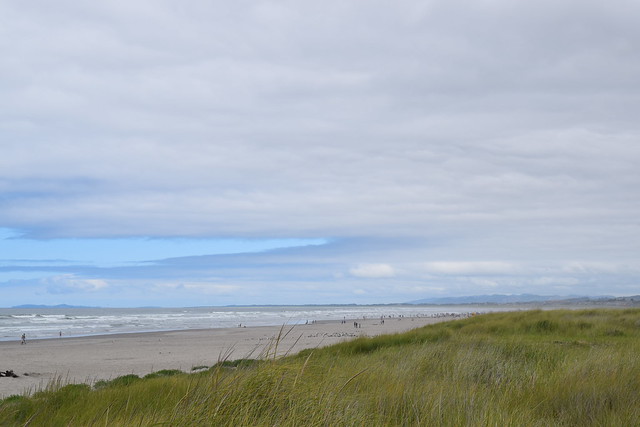 Astoria is the oldest American settlement on the Pacific coast. Founded by John Jacob Aster’s American Fur Company it helped cement the claim of the US to this part of the continent. Situated at the mouth of the Columbia River is provides spectacular views. Leaving the RV in the afternoon we stopped first at Costco to gather supplies then into Astoria for some sightseeing. First stop the Astoria Column, a 125-foot tower located on Coxcomb Hill above the city. Built to celebrate the city’s position in history the column provides a 360-degree panorama of the city and its surroundings.

The Astoria-Kegler Bridge connecting Astoria with Pacific County, Washington immediately attracted Tom. He had to cross it. It is an engineering wonder built in the 1950s.
Astoria is a city with beautiful architecture and well-preserved and restored buildings. Wandering the main streets and antique shops was a good way to spend a few hours. For dinner, we chose, at a friends recommendation, the Baked Alaska. No not the dessert, the restaurant on the waterfront. We both indulged in the Kobe Beef burger, a glass of hard cider and the spectacular views.
Back at the RV we packed and arranged to leave in the morning. We were saying goodbye to the Oregon Coast.