Did I say Glacier NP is amazing? It is so unbelievable, indescribable, beautiful that I am not sure what to write.
Monday was the first full day of our time here. We decided to visit the other grand lodge in Glacier, Many Glaciers, today and rather than test the heavy traffic on “the Going to the Sun Road" we took US 2 around the South parameter. Following the South Fork of the Flathead River, US 2 slowly ascends to the continental divide at about 6,000’. The drive was beautiful winding through the pine covered mountains along the clear rushing river. We made a quick picture stop at the historic Izaak Walton Inn situated on Amtrak’s Empire Builder route. It began as housing for Great Northern Railway works but morphed into a great inn. Built in the Tutor style it offers rooms in the Inn and also in cabooses located around the property. 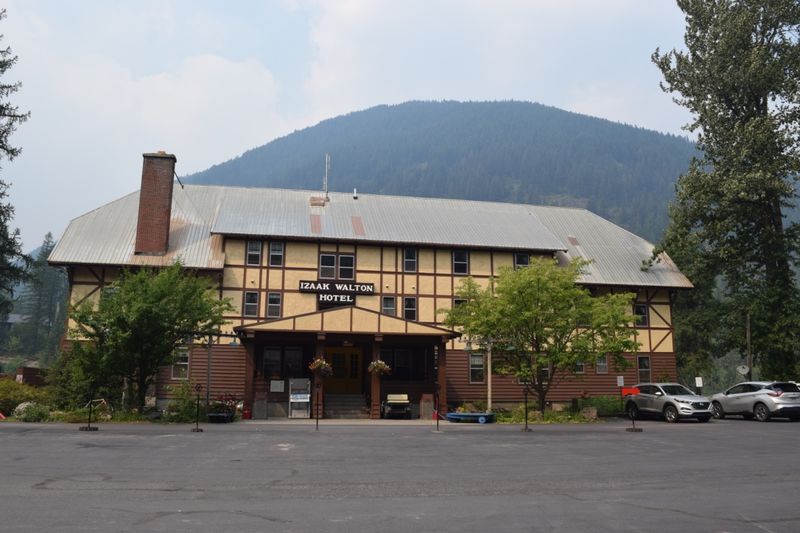 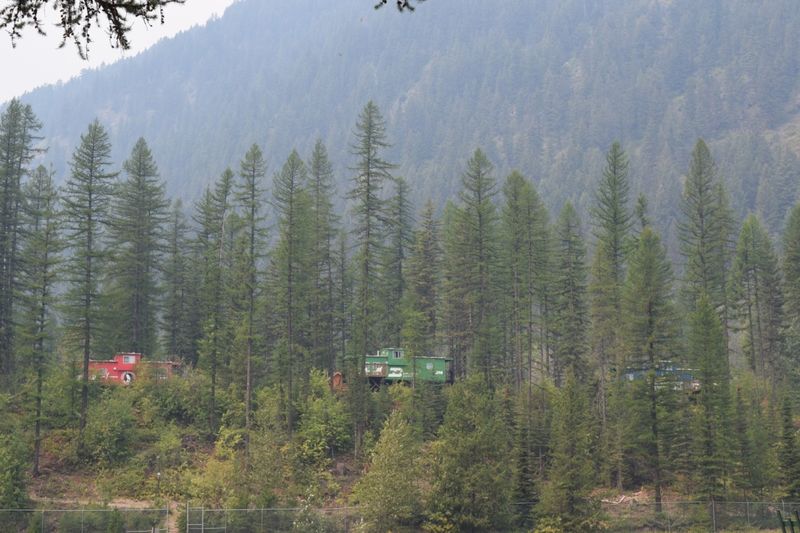 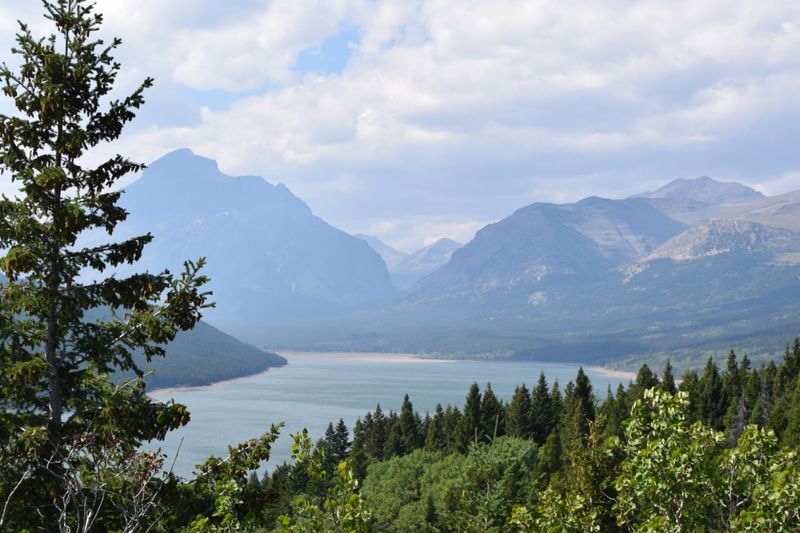 Next stop the Salt Lick. Mountain goats are very prevalent in this region and enjoy visiting the salt lick, unfortunately not on this morning.
Crossing the continental divide the scenery quickly changed from tree covered mountains to a more barren landscape of grass and small lakes and streams. 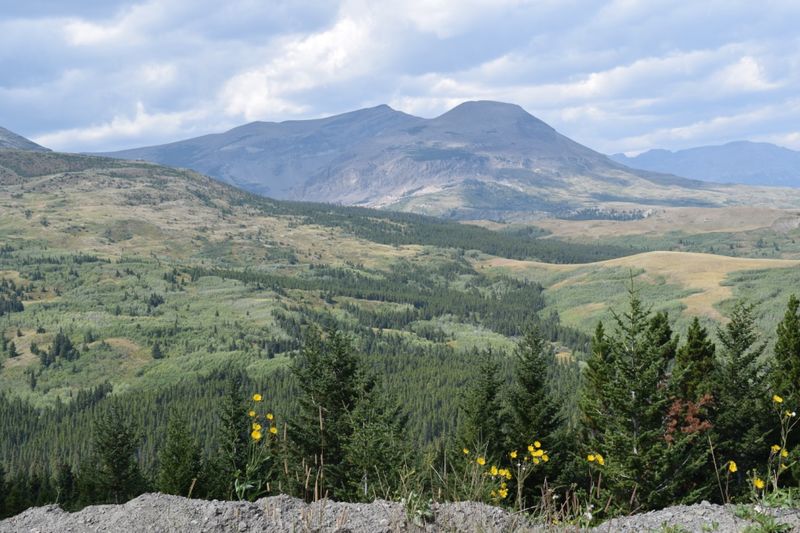 The town of West Glacier was our signal to turn North on MT49. Winding along the side of the hills 49 provided gorgeous views to the mountains. We also were visited by a few of the local wildlife. This area is open range land so “no fences" and the cattle roam as they please including across the roads. 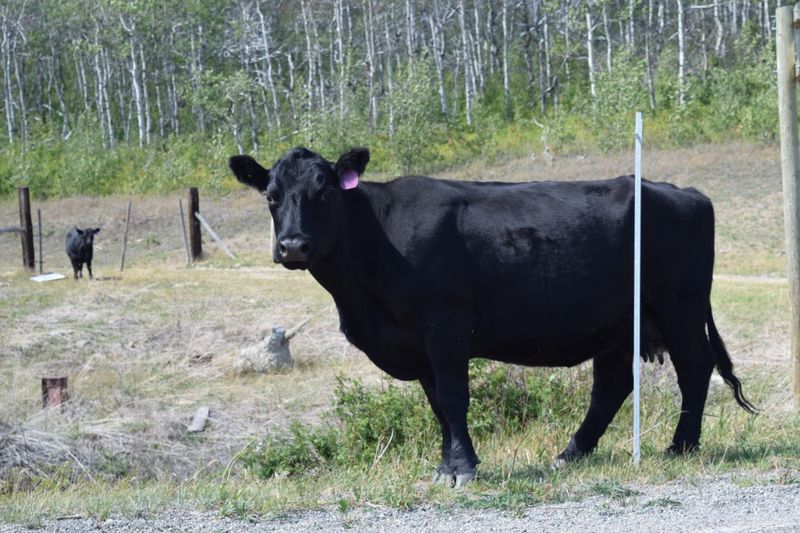 Rounding a bend we came across a herd of about 7 horses. No fences, so we concluded they were wild. They seem content to allow be to photograph them. 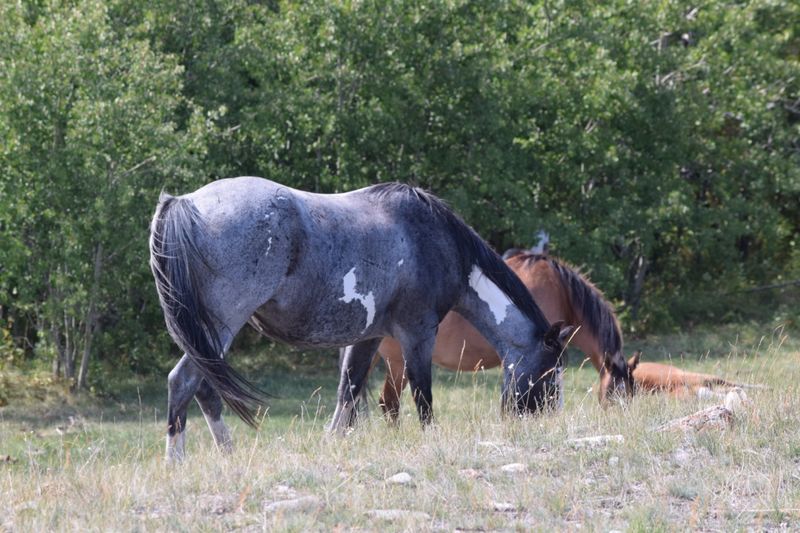 Finally arriving at Many Glaciers we were disappointed to find it closed for renovations. (I didn’t see that on the park website.) Only the restaurant was open. But we did see a bear high on the mountainside and enjoy the unbelievable scenery. 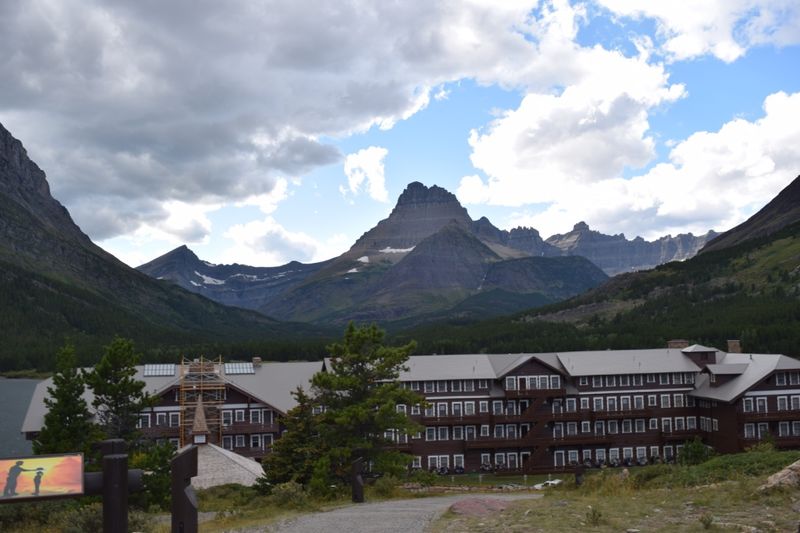 We returned to the RV via the Going to the Sun Road. Much of the eastern side of Glacier has been damaged by wildfires over the past several years. It is slowly recovering.
Tuesday we traveled eastward on the Going to the Sun Road to Logan Pass, the continental divide. Describing the road is too difficult in words, it is the only road that traverses the park from East to West for a length of about 50 miles crossing the continental divide at over 6,600’. The road hangs on the side of the mountain making many twists and turns as it makes its way to the top. It is very narrow at times seeming only inches separated the car from the edge. On the inside lane, the overhead clearance is often only 10’. It was designed and built in the 1920s, opening in 1932, specifically to allow automotive traffic to cross the park. We stopped frequently at the overlooks for pictures. 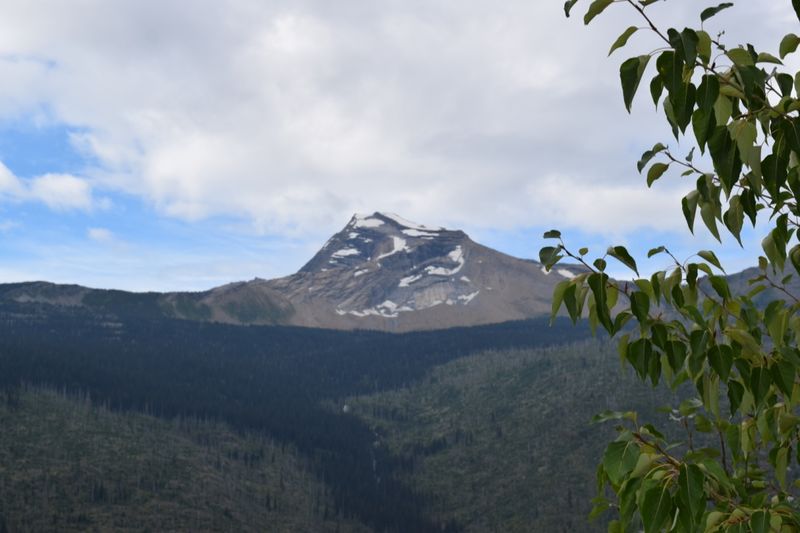 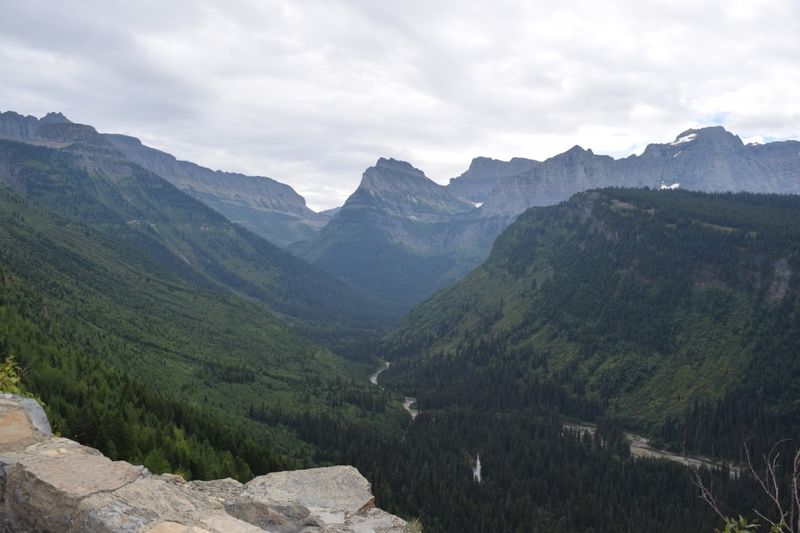 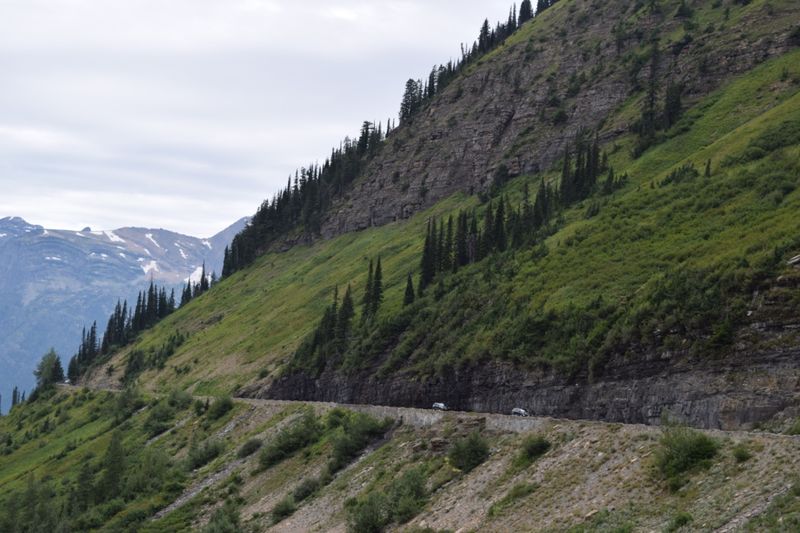 The visitor’s center at Logan’s Pass was jammed with people and vehicles. We were lucky, a nice young man offered us his space when leaving. A Mountain Goat study is being conducted here and the goats were easy to find. One nanny and her 2 kids were posing for pictures in the area. Walking up the Hidden Lake Trail looked easy so off we went. It began on a boardwalk with steps, no problem, right? Well, not so. To begin we were at over 6600’, Canton is about 1000’ so oxygen is thin, then that nice boardwalk angles up and the steps were built for giants. Enough complaining! It was a marvelous hike to the scenic point, about 1.5 miles. The remainder of the trail down to the lake was closed due to bears on the trail. The goats were roaming around us and the mountains and meadows were, well look at the pictures! 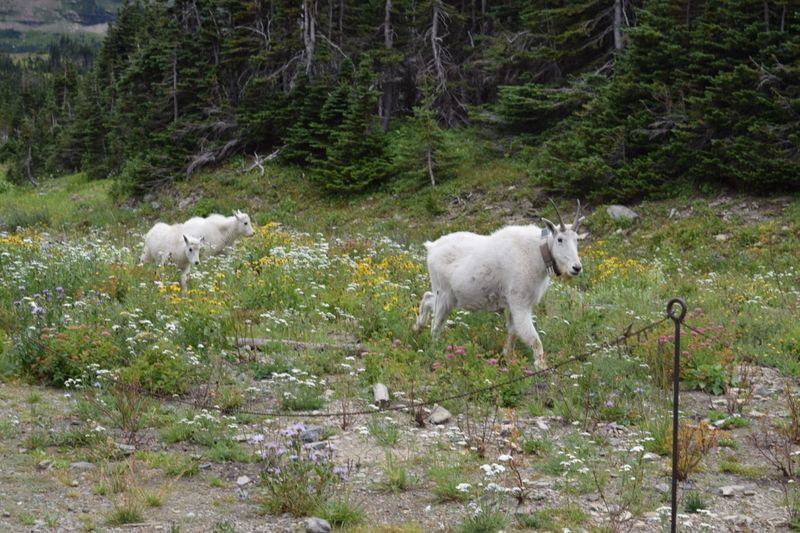 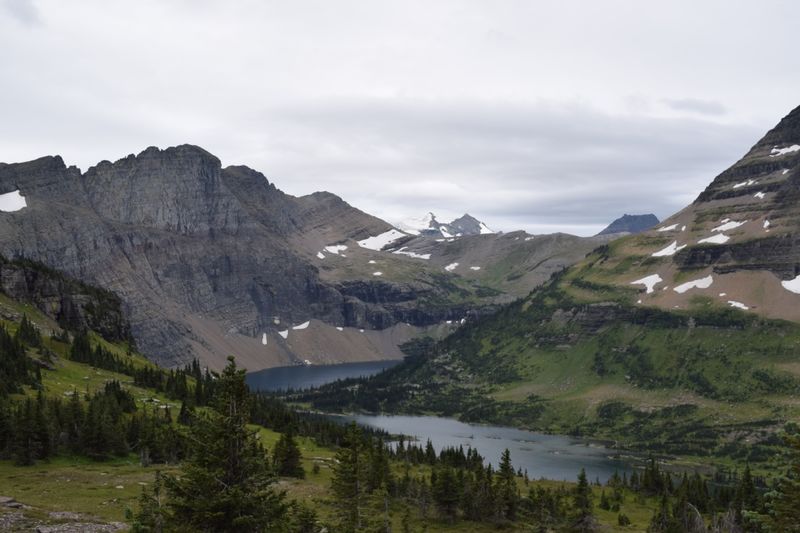 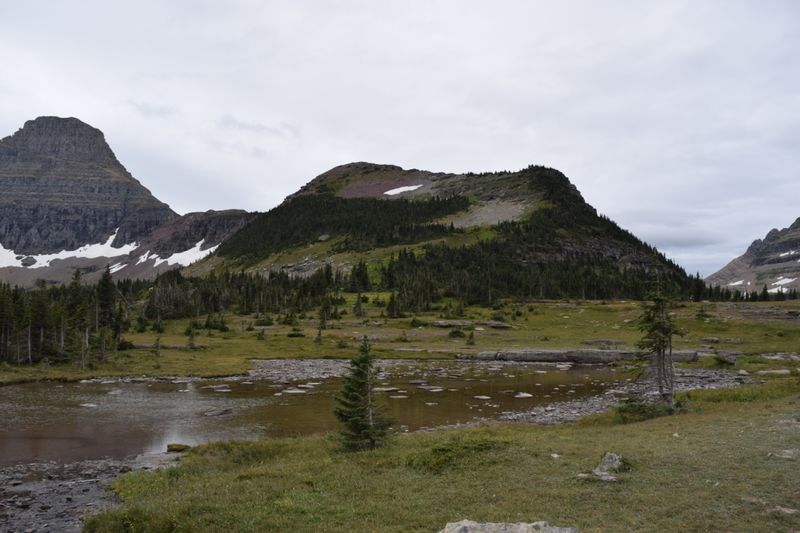 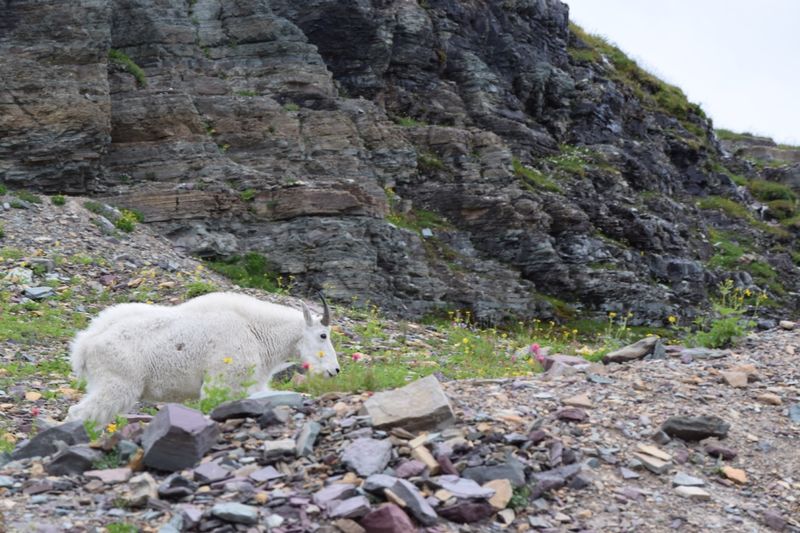 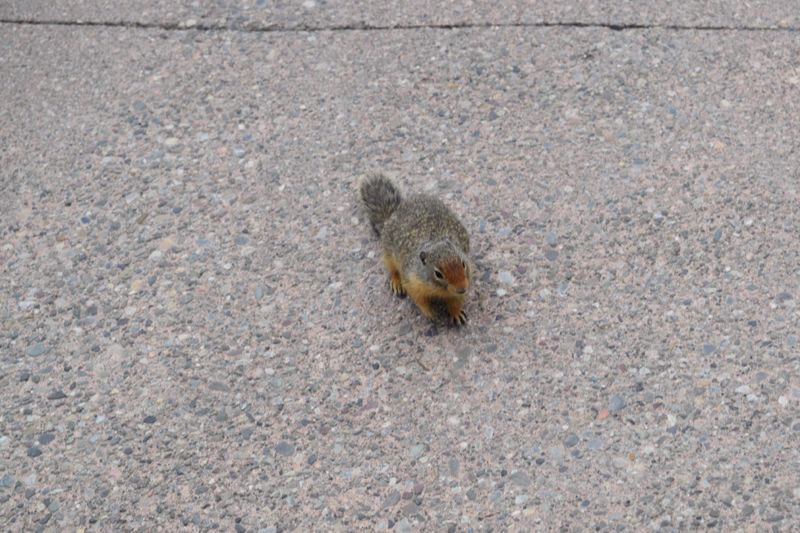 The other trail from Logan Pass, the High Line trail, was also closed due to bears. If you look closely at my pictures of the road clinging to the mountain you will see a line above it, that is the High Line Trail. 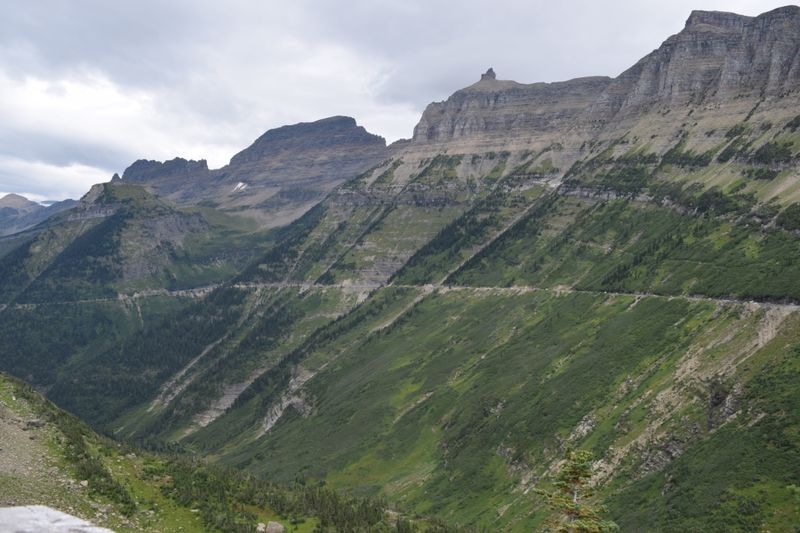 I am posting a few pictures on this blog but I have many more. Unfortunately the WIFI at this park is too weak to move them to Flickr to create slideshows. I will do it later and send a link when they are ready. 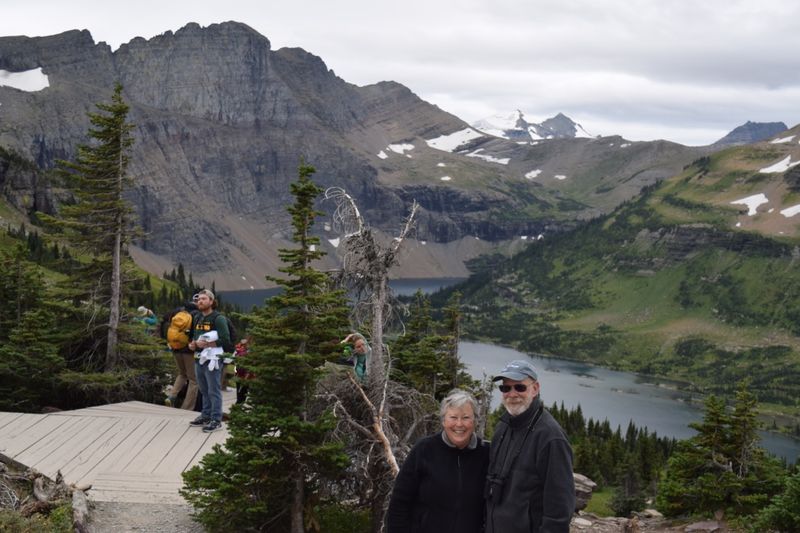