Tuesday 7/19/16
We sad hearts we left the coast of Oregon behind and began our journey East. We knew new experiences awaited us but the lure of the seacoast was great. We crossed the Cascades on US 26, through the south edge of Portland and to the mouth of the Columbia River Gorge at Troutdale, Oregon. Our campground, Sandy Riverfront RV Park, was located at the beginning of Old US Route 30, also known as the Historic Columbia River Byway. US 30 had been the first scenic highway in the US following way forged by Lewis and Clark and the Oregon Pioneers. Most of the original road was destroyed when I 84 was built to provided better access to Portland from the east. A new effort has been working to restore parts of the old road. We opted to use old 30 for as much of our travels as possible. 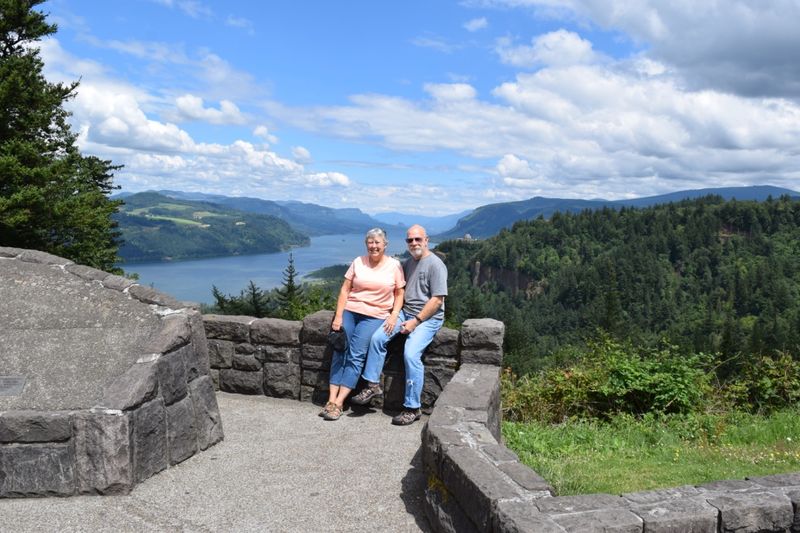 Exiting the campground we started east in the truck to our first stop at the Portland Women’s Forum State Scenic Viewpoint, our first look at the gorge. Can I use the word spectacular again? Yes, it was spectacular and all of the other superlatives I know. The Viewpoint provided views both east and west. So beautiful you could just look for hours.
But move on we must to the next stop at the Vista House. Vista House is one of the original stops on the old US 30. Perched on a bluff overlooking the gorge, this old beauty, opened in 1918 as the first stop on the new road, has been fully restored. Again the views were breath taking! 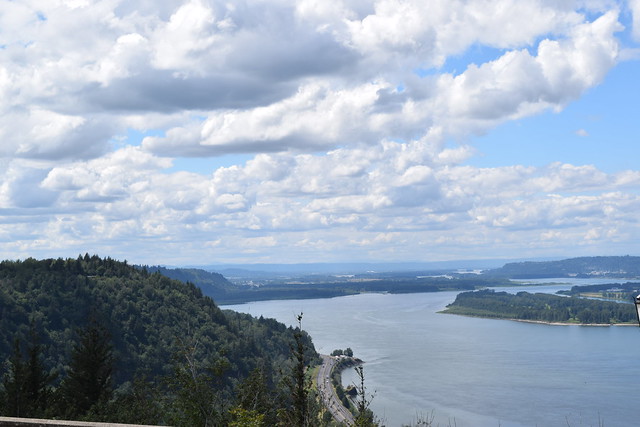 The gorge may be best know for Multnomah Falls but there is a trail of waterfalls to stop at and wonder.
Latourelle, 180 feet, falling straight into the pool below. 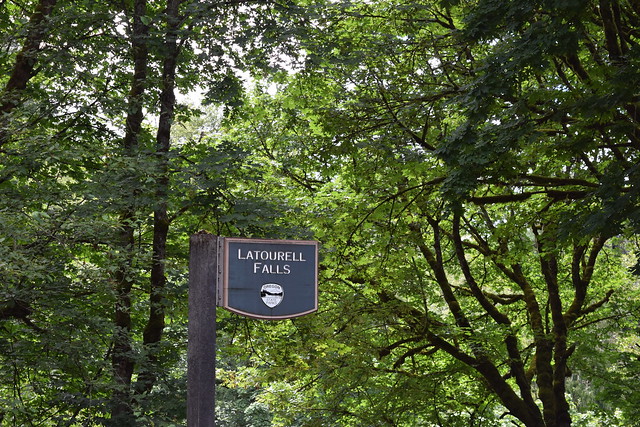 Shepherd’s Dell hiding in the trees. 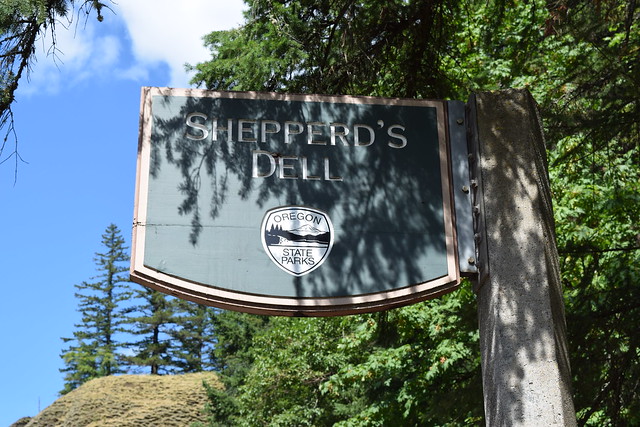 Wahkeena, a long hike down and up but worth the trek. 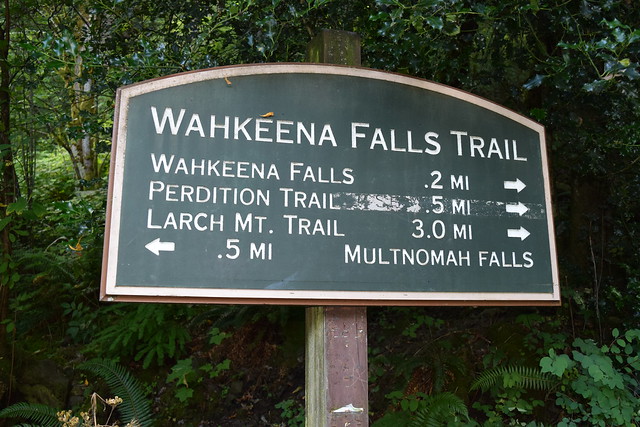 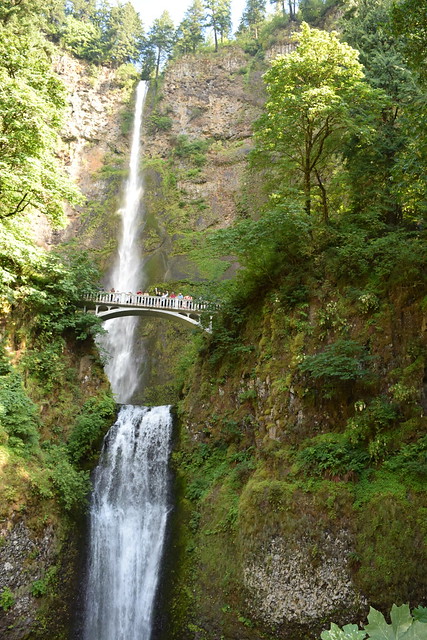 After the many waterfalls, we were pushed onto I 84 to continue our journey.
The Columbia River Rapids were created thousands of years ago when a landslide blocked the river in about 1450 AD creating a land bridge across the river. Native Americans called it the Bridge of the Gods. Eventually, the river eroded the dam resulting in the rapids, a major obstacle to river traffic. The first effort to bypass the rapids was the Cascade Locks built between 1875 and 1905. The locks were later submerged by the Bonneville Lock and Dam in the 1930s, built by the Army Corps of Engineers, providing jobs during the darkest days of the Great Depression and electricity for much of the Northwest. 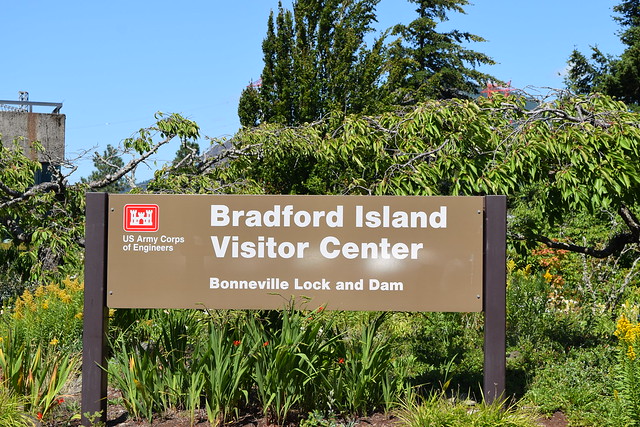 The Bridge of the Gods, opening in 1926, was named for the old Native American legend. It was originally a privately owned structure but is now publicly owned. The toll is a mere 50 cents.
Veering back onto old US 30 the road began to rise up the cliffside. The vegetation began to change from the beautiful forests of the western side of the mountains to the dry semi-desert plants of the eastern side. At the top was Rowena Crest, from here was again a view that takes you breath away. 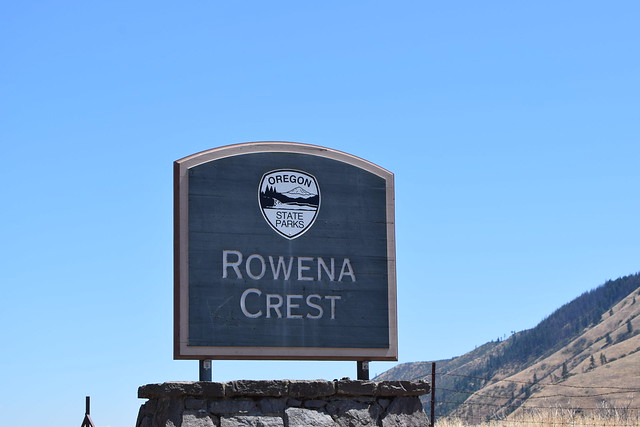 The last stop on our route was the Dalles. It was here the Oregon Pioneers had to decide between challenging the river by raft or climbing across the mountains. I am glad we only had to jump back on I 84 to return to our campground. 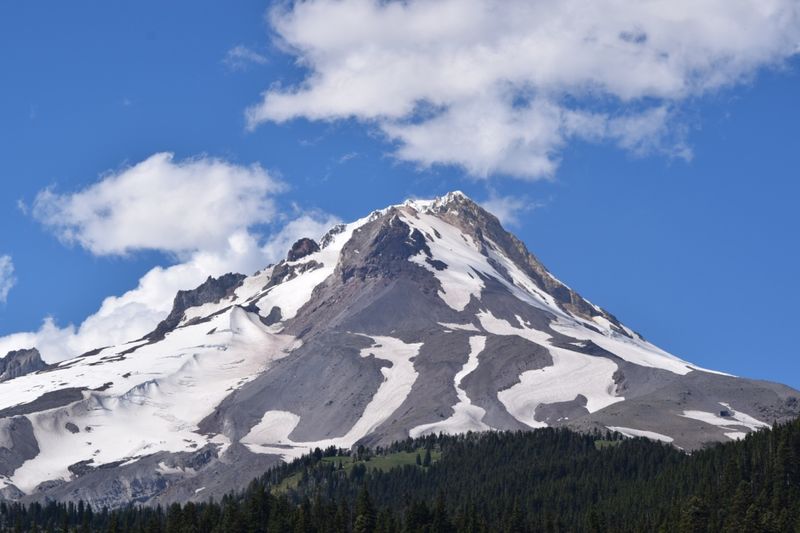 Missing from our trip on the gorge were views of Mount Hood! Called one of the 7 Wonders of Oregon we wanted to see this mountain. Starting in Hood River we followed US 35 through part of the “Fruit Valley" until we caught our first glimpse of the mountain, for there it was a game of peek-a-boo as we twisted and turned through the forests and fields. Like the other mountains of the Cascade Range, Mount Hood is a volcano, signs of her last explosion were clear from the river of lava down the side.
From US 35 we turned up to the ski lodge at Timberline Lodge. Located above the tree line the lodge was built between 1936 and 1938 by the Works Progress Administration using local workers and artisans and dedicated in 1937 by President Franklin D. Roosevelt. It is magnificent! 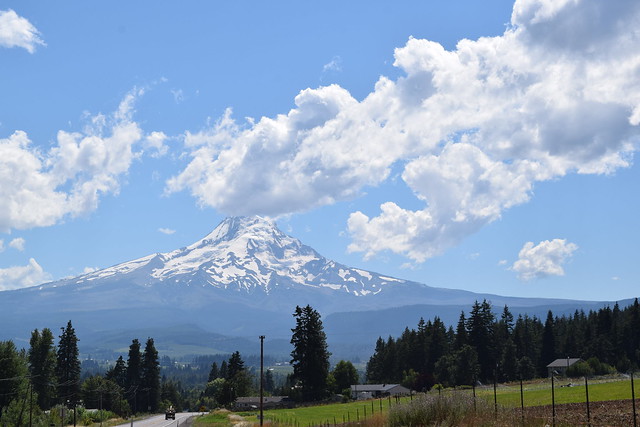 Timberline was our last stop on the trail, we returned to camp to prepare for our next stop: Mount Saint Helens.
For more information on Timberline:
https://en.wikipedia.org/wiki/Timberline_Lodge