On Sunday, September 23, we left San Diego behind heading for Highway 395, the Eastern Sierra Scenic Highway. Getting out of San Diego was not a problem but getting over the mountains, maybe. Tom did some research on the highways, we discussed the issues and possibilities, then decided to avoid the El Cajon Pass and take I 10 and I 210 through the north side of Los Angelus, then California 14 east of join 395. It was a risky choice that worked perfectly, traveling on Sunday morning there was very little traffic on the LA expressways. It took about 2 hours, but we were soon back in the desert again.
Our first stop was Lone Pine, CA. and the Boulder Creek RV Park. What a great choice! Despite being in the desert, the campground is situated in a grove of trees that provide shade and privacy. I chose Lone Pine for a few reasons, it is at the foot of the Mount Whitney Portal (the highest mountain in the contiguous lower 48), the home of the Western Movie Museum and the Alabama Hills (used as location for many of the old Western movies and TV shows), views of the Eastern Sierra’s, and access to Death Valley National Park.
We had been having some problems with the tow overheating, our first day in Lone Pine it became severe. We attempted the Whitney Portal only to turn back as the engine was overheating. We stopped at a local auto repair to determine what the problem was, they decided to replace the thermostat and possibly the fan clutch and radiator we went to visit the Western Movie Museum. Tuesday they replace the thermostat, but it didn’t really solve the problem so Wednesday it was the fan clutch. The truck is running better now but not perfect. We hope it will not give us any more problems.
With the problem with the truck, we added two days to our time at Lone Pine. Then there was the wind, the winds began to blow with terrific wind gust followed by three days of predicted rain, so we extended our stay again. The most interesting thing about this was to set in the RV watching a rainstorm traveling up the valley.
Now on to the more exciting days, and some information on the Owens Valley and route 395. The valley is a broad stretch situated between the Inyo mountains on the east and the Sierra Nevada on the west, the Alabama hills crop up for several miles to the west of 395 parallel to the Sierras. The Alabamas consist of large loaf shaped bounders, with verticle splits or cracks in the rocks, rocky canyons, and several natural rock arches. Early movie makers recognized these hills as the perfect location for filming cowboy movies. The recesses, canyons, and arches of the hills combined with the wide-open spaces of the valley were perfect. Many of the great western cowboy movies and TV show were filmed in the Alabama Hills and the Owens Valley. 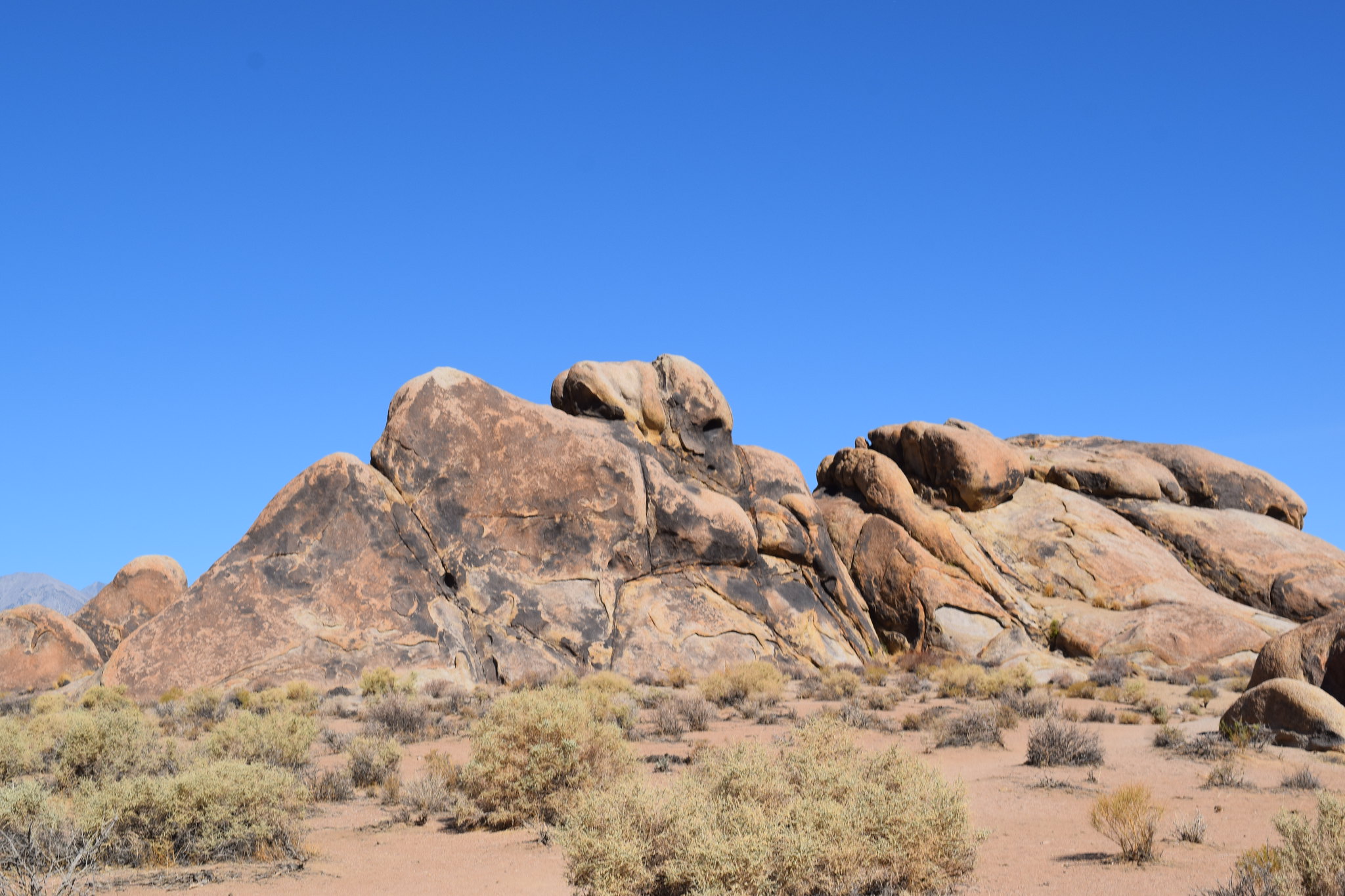 Our days were filled with things we loved. The Western Film Museum was so much fun, each section dedicated to famous cowboy actors. The Lone Ranger and Tonto, Roy Rogers and Dale Evans, Gene Autry, John Ford and of course John Wayne, with splashes of many of the other greats. Modern movies were also filmed in this area, Star Wars, Star Trek, Iron Man, among them. It was a great trip back into our childhood with these great old western stars and movies. Each October the town of Lone Pine hosts a Western Movies Festival with showings of the oldies, a parade, tours of places like the Lone Ranger Canyon and more. https://www.museumofwesternfilmhistory.org 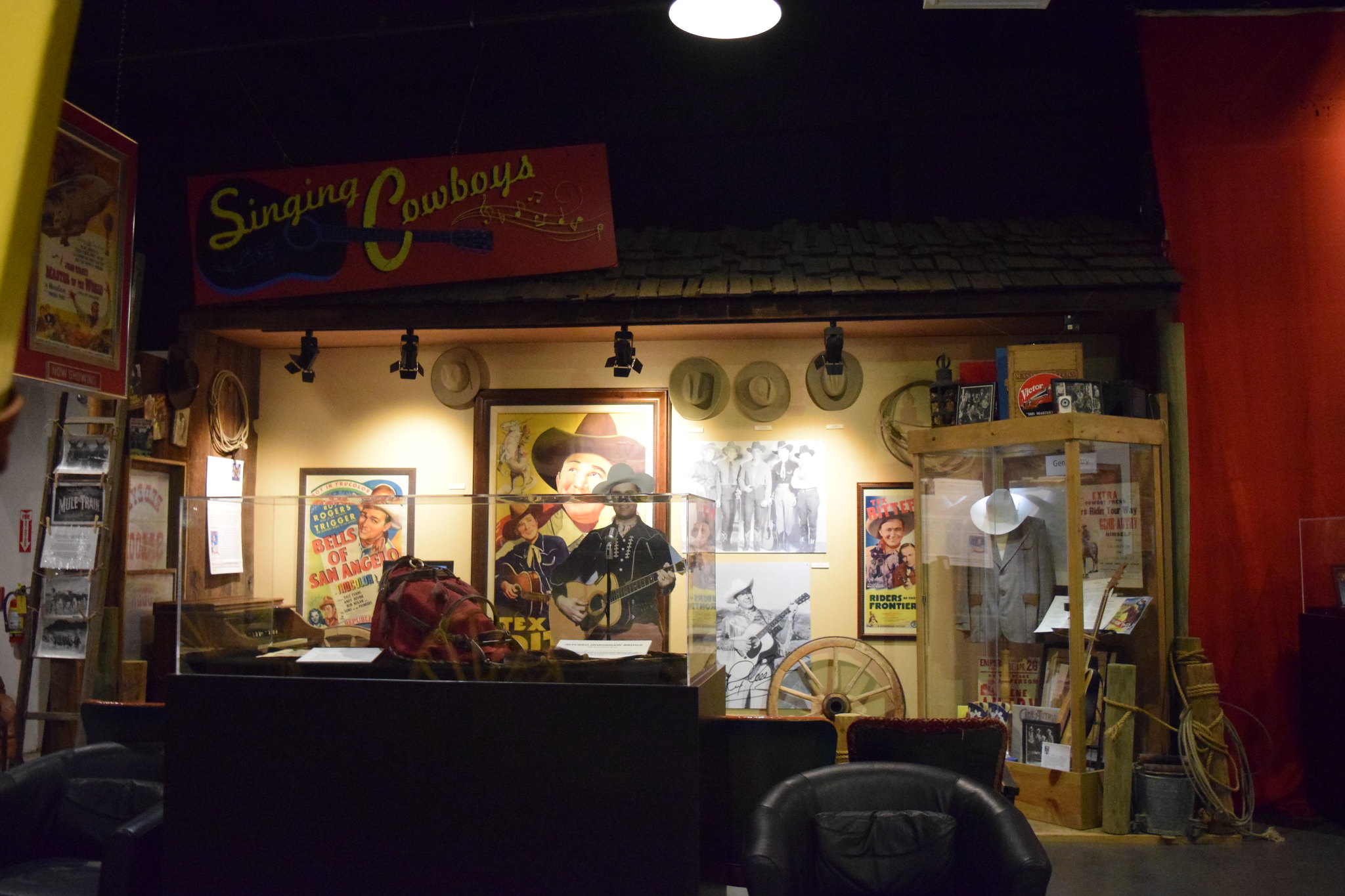 The spectacular Eastern Sierras are the great show here with Mount Whitney as its centerpiece. We traveled up three of the mountain roads to trailheads and spectacular views. After chatting with the ranger in the visitors center, we took the road to Horseshoe Meadows. A series for switchbacks took us twenty miles up the side of the mountain, offering fantastic views of the Owen Valley and Lone Pine below. The road ended at a beautiful mountain meadow over 10,000 feet in the sky. From here the adventures hikers take the Cottonwood trail into Golden Trout fishing lakes. The trip down was more hair-raising, with long downward stretches ending in hairpin turns that had me gripping the seat. 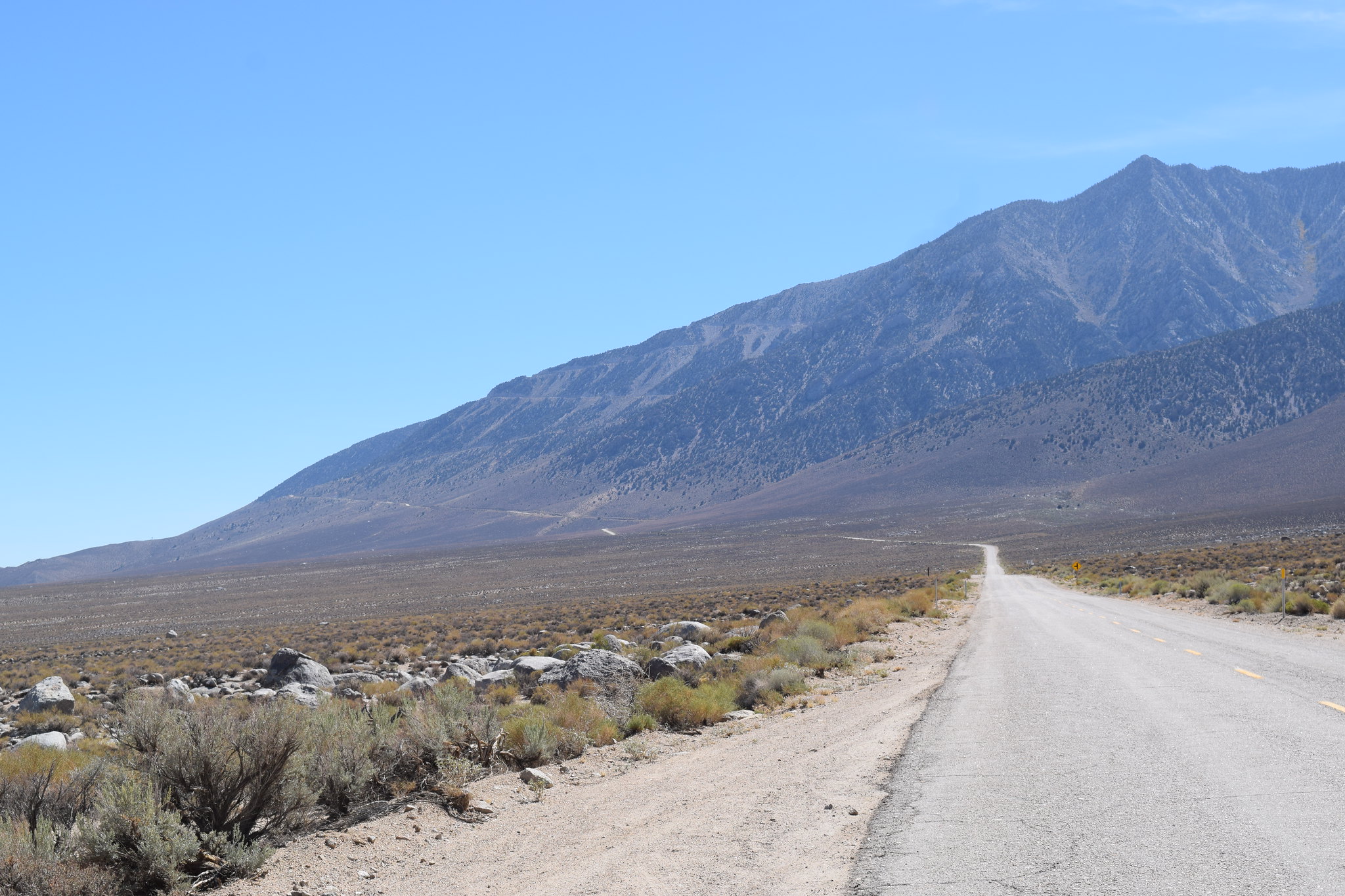 Next, we challenged the MT Whitney Portal road, another steep climb up to a gorgeous forested canyon. With three campgrounds, a fishing pond, mountain streams, and various trails leading either deeper into the mountains or just short hikes it is really not to be missed. We began to chat with a couple preparing to hike, where they were going and how long. It turned out they were on their way to meet their daughter, the daughters were returning after hiking to the Canadian border on the Pacific Crest Trail. The couple brought their daughters extra food so they could continue down to the Mexican border. But they were not going to hike up from the Whitney Portal, they were leaving their car, hitchhiking down to Lone Pine (15 miles) then north on 395 to Independence (15 miles) then up the next road to Onion Valley (15 miles). Tom and I looked at each other and offered to take them if they didn’t mind riding with the dog. They didn’t mind the dog at all. Another beautiful drive to a beautiful mountain valley. 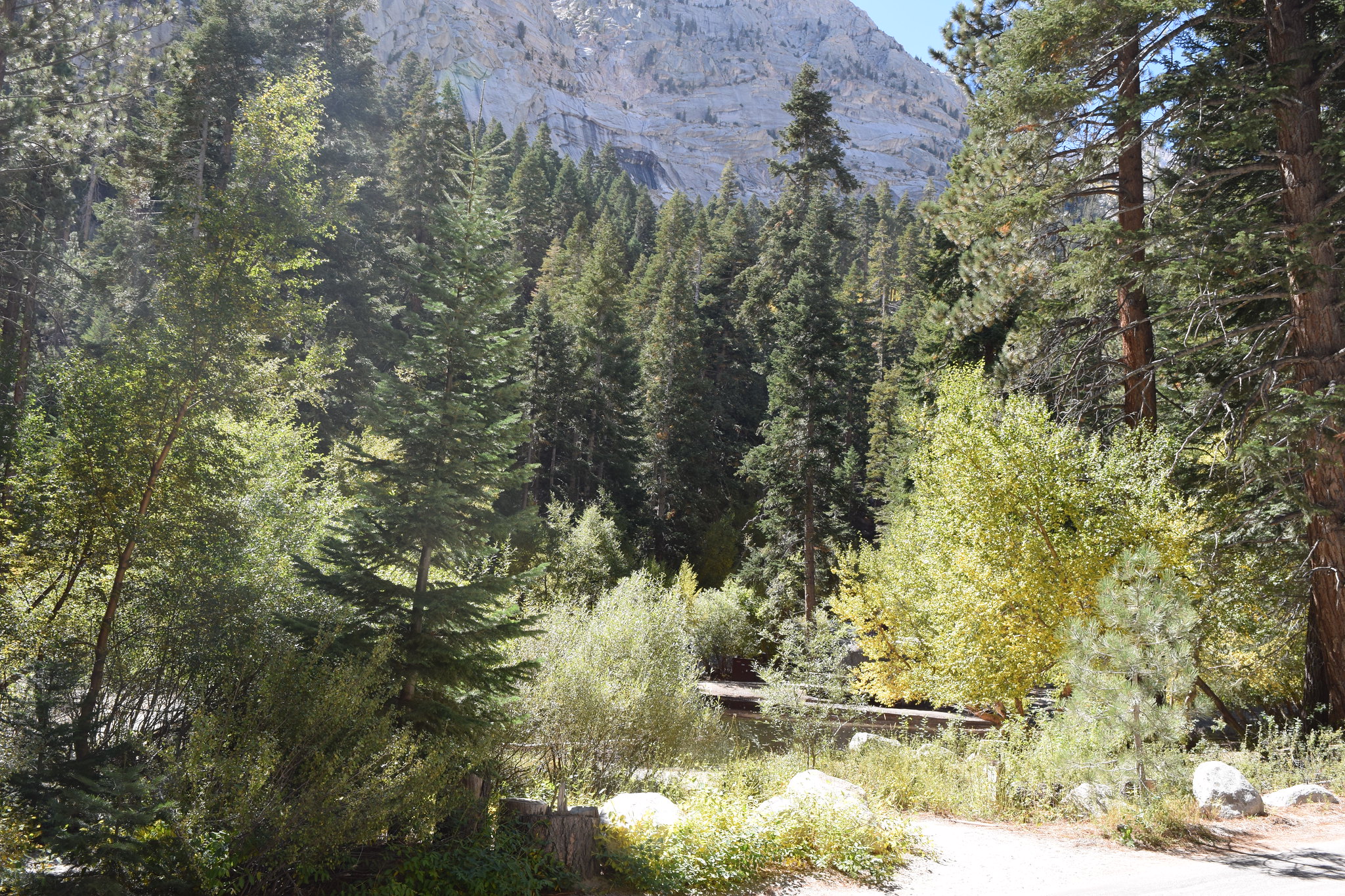 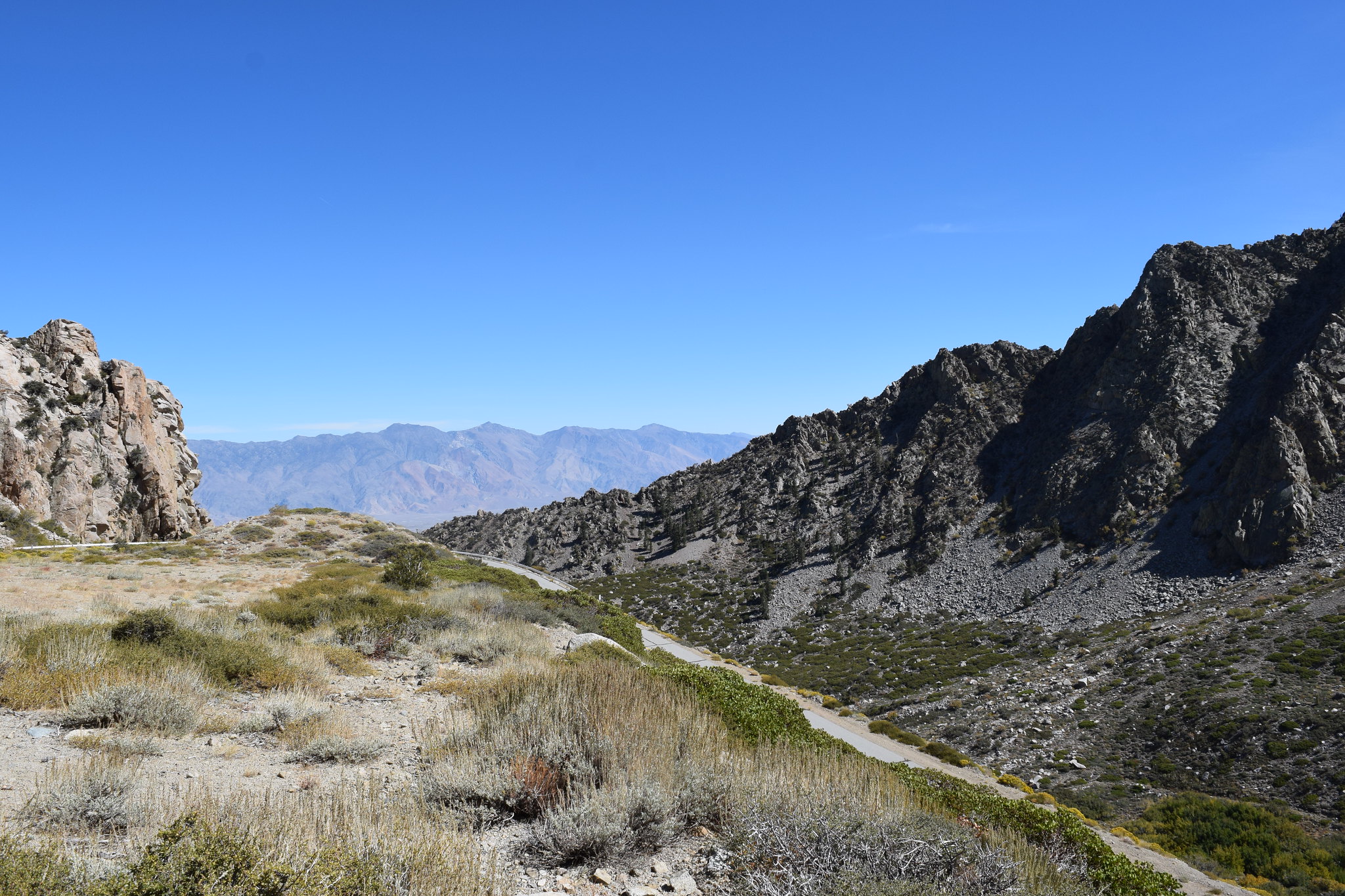 When we stopped at the visitor center the ranger told me the little store at the Whitney Portal had the best Hamburger he had ever had, that combined with our shot stay convinced us to drive up again. This time we walked among the pines, watched the waterfalls and split one of the biggest and best burgers ever. Another wonderful day.
Not satisfied two three mountain drives we had to visit White Mountain, the home of the Bristlecone Pines. Located north and east of Bishop, CA it is not in the Sierras. However, that does not mean it is not high, at over 10,000 feet it took a 22-mile drive to get to the Bristlecone. Now you might wonder why we would drive up steep, narrow mountain roads just to see another kind of pine. Well, in the 1950s the Bristlecones were found to be the oldest living organisms in the world. One, know as Methusala, is estimated to be over 5,000 years old. I would like to say they are tall majestic trees, but really they are not very tall but have a massive root system snaking across the ground. Yes, another exciting and great day. 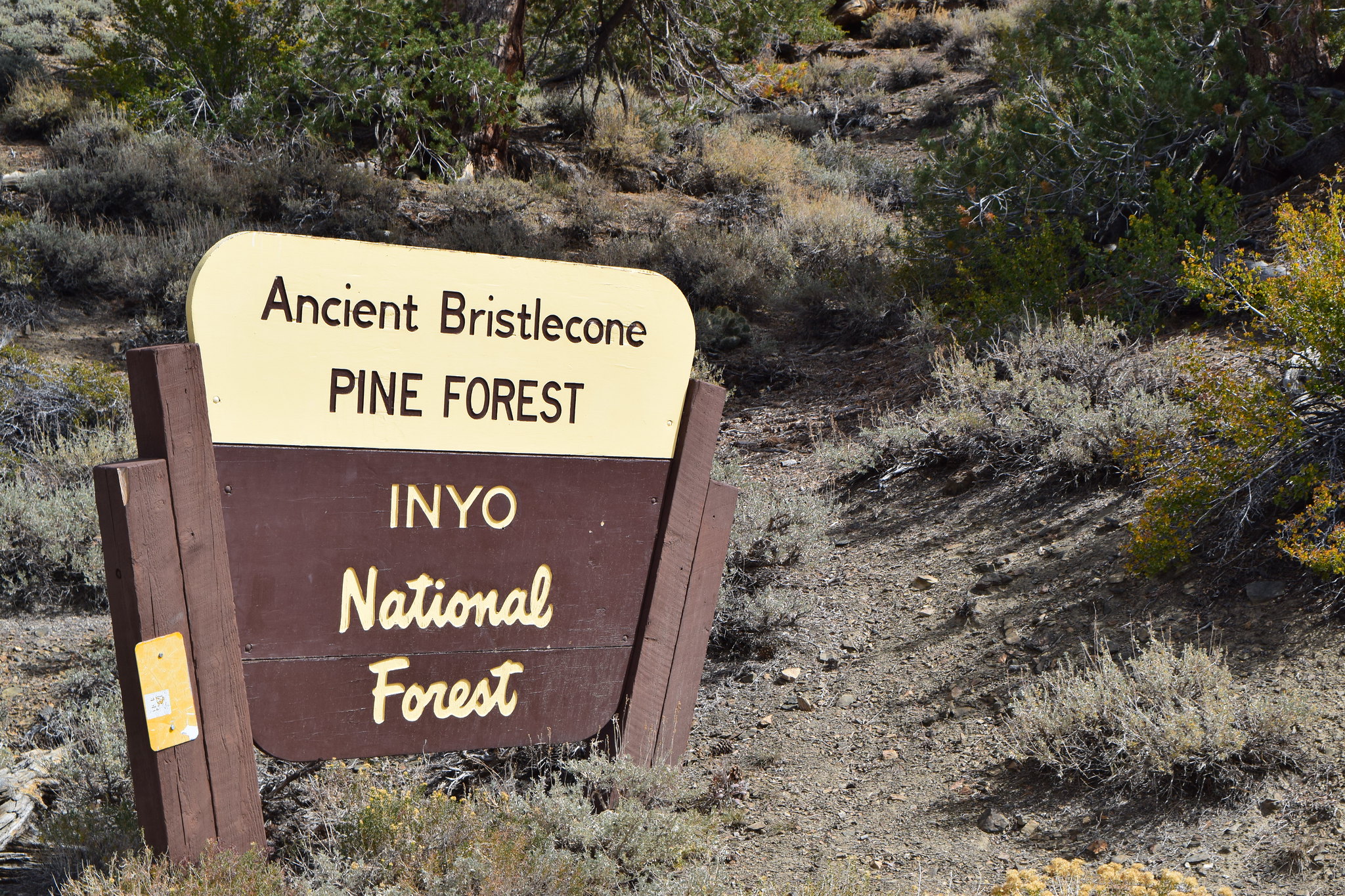 A less successful day was our trip to the Laws Train Museum just north of Bishop. Here a group of enthusiasts had collected buildings, houses and train equipment from across the Owens Valley. Unfortunately, most of it was in very poor repair. We did enjoy looking around at what they had, but it could have been so much more. The good part of the day was a stop at Eric Shatz Bakery. Here they make the “original" sheepherders bread. We had to stop. The bread is delicious. We purchased a sheepherders loaf, sourdough loaf, raisin bread, and a pecan pull apart. Most are packed away in our little freeze. Well, worth the stop. 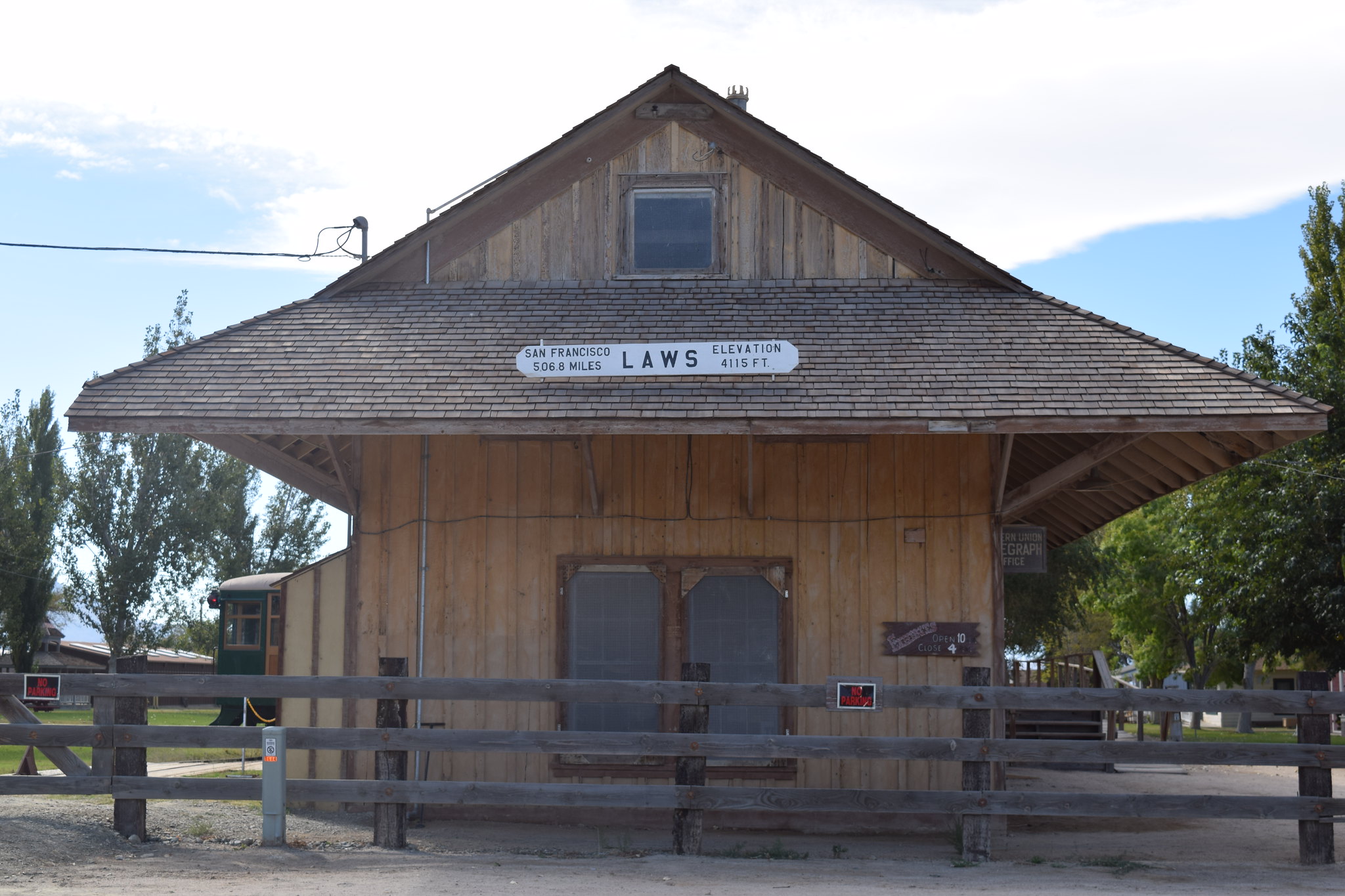 Being as we were in trout country, we had to make a visit to the Mount Whitney Fish Haturary, Built in early 1900 to protect and persevere the Golden Trout (the official California fish), the haters was nearly destroyed by a fire and flood. Fortunately, a group of local folks saved the building the ponds so future generations can visit this lovely building. Inside they explained how the hatchery function and the history of the Gold Trout. The trout is only found in a few remote Sierra Lakes, accessible only by long hikes. They did have a lovely pond filled with trout that appeared to be starving from the amount of food I fed them. 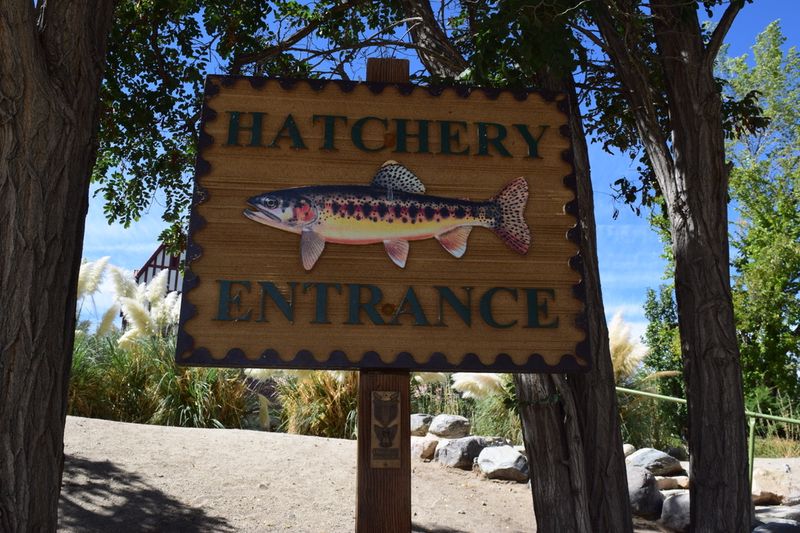 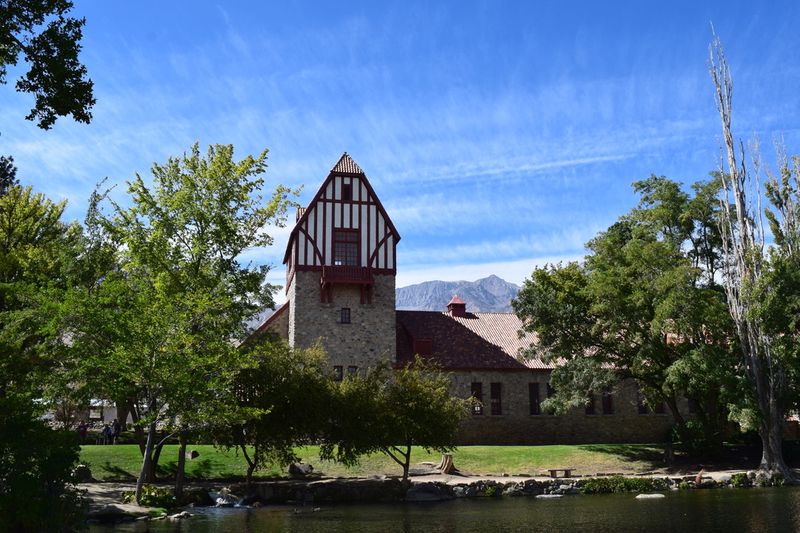 On our last day, we decided to go to Death Valley National Park. It was on our definitely want to do list, but with temperatures topping 110 F we just didn’t want to do it. However, now the temp was down to only 95, so off we went. Over 2 mountain ranges, then down into the valley over 200 feet below sea level. It was interesting, miles of salt flats, the beautiful colors in the rocks of the Artist’s Pallet and of course Bad Water Spring the lowest point in Death Valley. We saw a real Borax mine complete with 2 borax wagons but no 20 mule team. The Sand Dunes were amazing but to be honest, it is one place I have seen and had no desire to return. 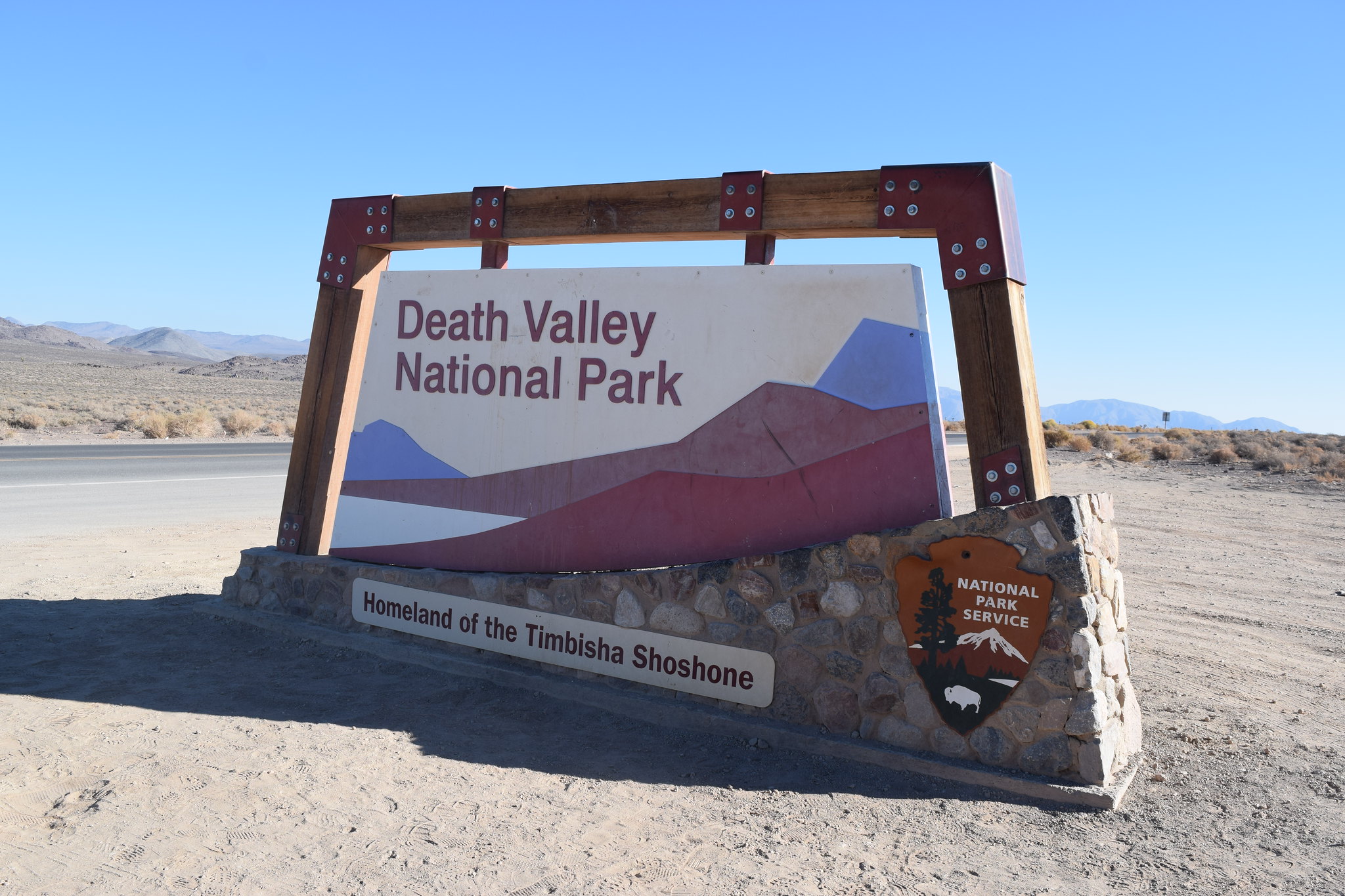 After 3 days of heavy winds and rains, we were way behind our schedule and had to move on. We took two days to drive up the 395 to Reno, each turn brought new sights and terrain. All of it beautiful and telling us we should return some day. We saw our first snow on the Sierra peaks, and gorgeous meadows surrounded by snow-tipped peaks.
We stayed two nights near Reno, at Gold Casino at the top of Donner Pass. We drove to Lake Tahoe on the intervening day. What can I say just spectacular? Then on Monday morning the drive down the mountains, through Donner Pass to Sacramento, from over 7000 feet to only 50. It was quite a drive.
Next stop: Yosemite National Park.