On Tuesday 8/3, we left our peaceful COE park moving eastward to Clarkston, WA just across the Snake River from Lewiston, ID. Our plan, a jet boat trip on the Snake through Hell’s Canyon. For those not familiar with Hells Canyon, it is the deepest canyon in the US and the river has category 3 and 4 rapids. We have been planning this adventures since we first saw the Snake in Twin Falls, ID. Now we were not going on a rafting trip but a jet boat but it would still be a rough ride.
Tuesday morning dawned warm and sunny but very windy. This is not good when you are in a 40 foot long, 13-foot high motorhome. In addition, our route, WA 123 and US 12, was very winding and had many hills. It made for a tough day for Tom as he had to fight the wind as well as the road. The countryside was quite beautiful in its own way. Miles and miles of wheat fields, then deep valleys. very few small towns. The highlight was a small rest area on top of one of the hills where we could watch the harvesters bring in the wheat. This was, of course, part of the Lewis and Clark route and we enjoyed reading the historic signs. 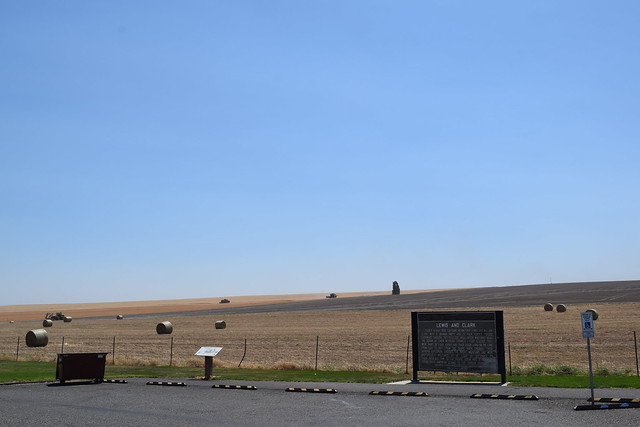 Clarkston was much as we expected, a small city located on the river. Crossing the Snake River bridge brought us into Lewiston, ID, a bit more upscale than its neighbor but still a small older city. Our campground was located in a marina on the river, so my early morning view was beautiful.
We were staying here for a few nights until our date for our jet boat ride. As always we found a few things to interest us. We went out for pizza. Now, this pizza place, according to Buzzfeed, is one of the 18 pizza places you must eat at before you die. Well, all I can say is they have never had Pizza Oven pizza from Canton, Ohio. It was good but not great.
Also on our list of places of interest was Jack O’Conner’s Museum. O'Connor wrote for Outdoor Life from the 1940s through the mid-70s, Tom recognized his name immediately. His field of interest was hunting, especially big game hunting around the world. He donated much of his trophy collection to be preserved in a museum in Lewiston with the understanding it would be free for people to enjoy. The mounts were truly amazing and Tom thoroughly enjoyed himself. The O'Connor exhibit was located in the Hells Gate State Park where there was also an interesting Lewis and Clark exhibit.
Day two in Clarkson we took in the Nez Perce National Historic site. The Nez Perce tribe has fascinated me for years. When the Europeans arrived they very friendly, joined the Christian Churches and began to farm. However, over time the US Government continually broke their treaties with the Nez Perce and in 1879 a war began. The US Army pursued the tribe across much Idaho and Montana as they attempted to escape to Canada. Several battles were fought with many women and children killed. The leader, Chief Joseph, eventually was forced to surrender just short of the Canadian border. The museum was filled with beautiful examples of the clothing, ornaments, and equipment used by this tribe. There was also an excellent movie portraying the lives of the people. For those of you who fancy horses, the Nez Perce developed the beautiful Appaloosa. A very enjoyable day. 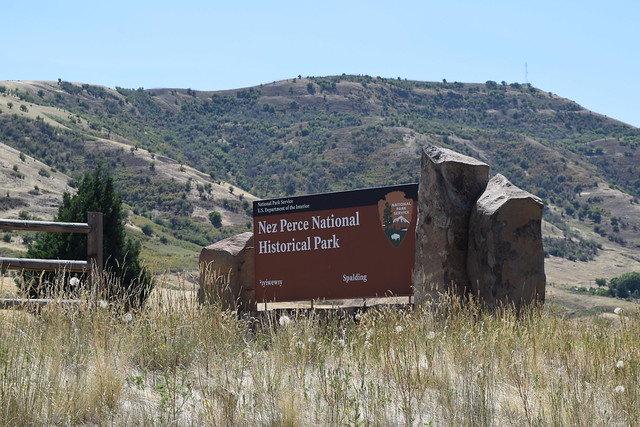 Friday arrived, time to journey south to White Bird, ID home of Kilgore Adventures and our jet boat ride. Again the countryside was covered with miles and miles of wheat fields. Then we reached White Bird Hill. Now we knew we had been steadily moving up hill but we were unprepared for the downhill, 8 miles at 7%, it was long and steep.
I should tell you about Hells Canyon. To begin it is not an official geographic location. It is located about 90 miles south of Lewiston, ID and extends about 40 miles south. Early explores called it Box Canyon or Snake River Canyon, it was not until the late 1800s that it was called Hells Canyon. He Devil Mountain, the tallest in the range surrounding the gorge, is 9,393’ about sea level and 7,913’ above the canyon. The Snake originates in Yellowstone NP at 9,500’ and winds through southern Idaho before turning north forming the boundary between Idaho and Oregon. It finally enters Washington and joins the Columbia at Pasco 1036 miles from its source. Flowing through the canyon it is a beautiful river, the water is clear and teaming with fish.
The day of our trip dawned gray and overcast threatening rain. Hoping for clear skies we began our drive to Pittsburg Landing only 17 miles from the campground. Traveling on a dirt road that wound up and down, around the hills and valleys, it took us a full 45 miles to cover the distance. The scenery was spectacular, deep valleys covered in pines. We could see from miles. The last 5 miles took us down to the river landing. 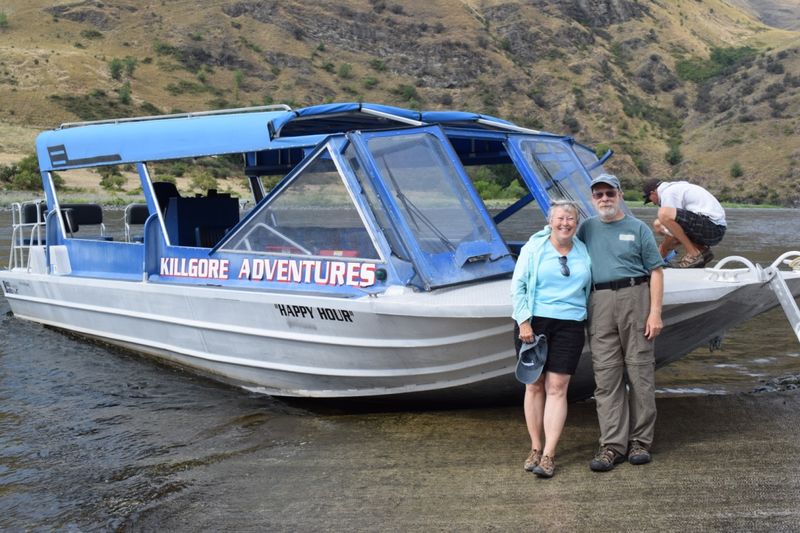 Soon we were on the river, cruising through the calm places then bouncing over rocks in the rapids, the spray flying around us. Our first stop was at Kirkwood sheep ranch, now part of the Hells Canyon National Recreation Area, with interesting displays of life on the river in the past.

The journey upriver was fun. Stopping for lunch at the Hells Canyon Dam, we had the opportunity to talk to the rangers and just watch the river run by.
Our return trip was much more exciting. Going with the current the boat crashed into the rapids throwing cascades of water across the boat. We also had the chance to see some of the local inhabitants, a beautiful Bald Eagle sitting regally in a tree, a brown bear came down on the rocks to greet us, two huge bighorn rams munching on grass and a black tail (mule) deer on the rocks. This was one of the best days on our journey.
We are now in Post Falls ID, about 170 miles north of Hells Canyon and will leave here today for Montana. We stopped here so Tom could visit the Buck Knife Factory.
The past week has been wonderful, however, there is one problem. I lost my little SD card with all of my pictures. After searching the RV thoroughly I purchased a new one and still hope it will turn up.