Wednesday we left Gallup, NM for Holbrook, AZ, located between the Painted Desert/Petrified Forest National Parks and Winslow, AZ., it is in a good location to visit both. With only 90 miles to drive, we opted for a late start, arriving in the early afternoon to get the RV set-up before heading down to Winslow for the evening. Winslow turned out to be a cute little town dedicated to the Eagles and Old Route 66. In the center of town is a statue of a guy “standing on the corner, a girl leaving her flatbed Ford and of course her Ford. The music of the Eagles flows out of the various shops. After poking around in the shops, taking a few pictures, we stop at BoJo’s (recommended by the locals) for dinner. Tom had some pulled pork, and I had the Mexican Tacos (lettuce, tomato and dill pickles), both were rated very good. They also had some of the best salsa I have ever had. 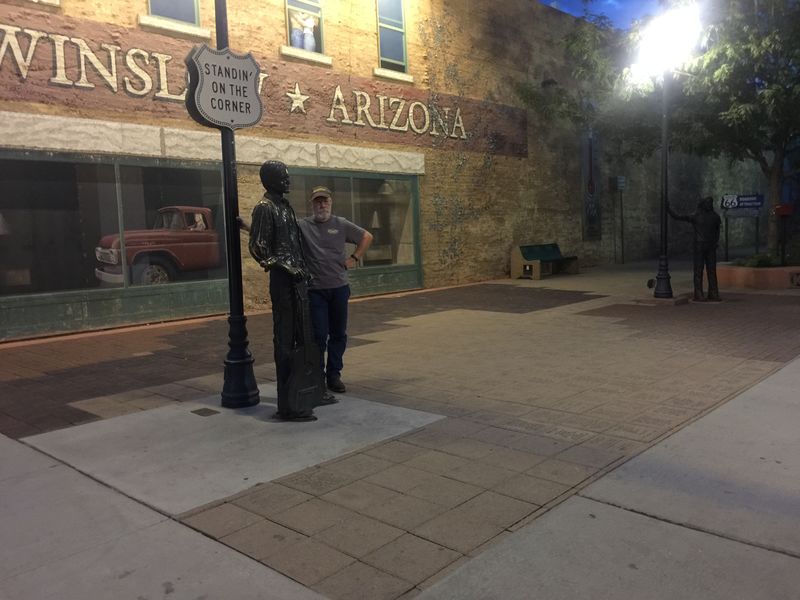 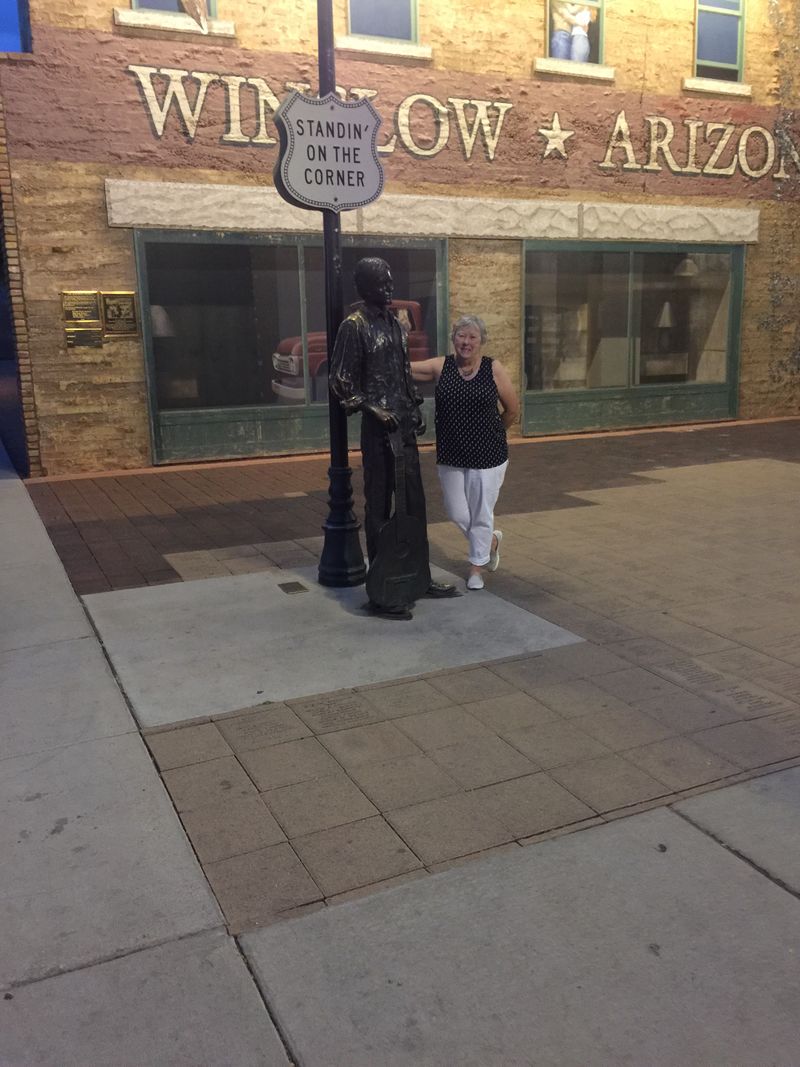 Knowing it was going to be HOT, we set out early on Thursday for the Painted Desert and Petrified Forest National Parks. One of our first National Monuments, the Petrified Forest was so named by Teddy Roosevelt in 1906 to protect the rich deposits of petrified wood, ancient dwellings, and petroglyphs located there. Although two parks, visitors begin at the joint visitor center located north I 40 then travel the 28-mile park road stopping at multiple overlooks to be amazed by the beauty of the place. 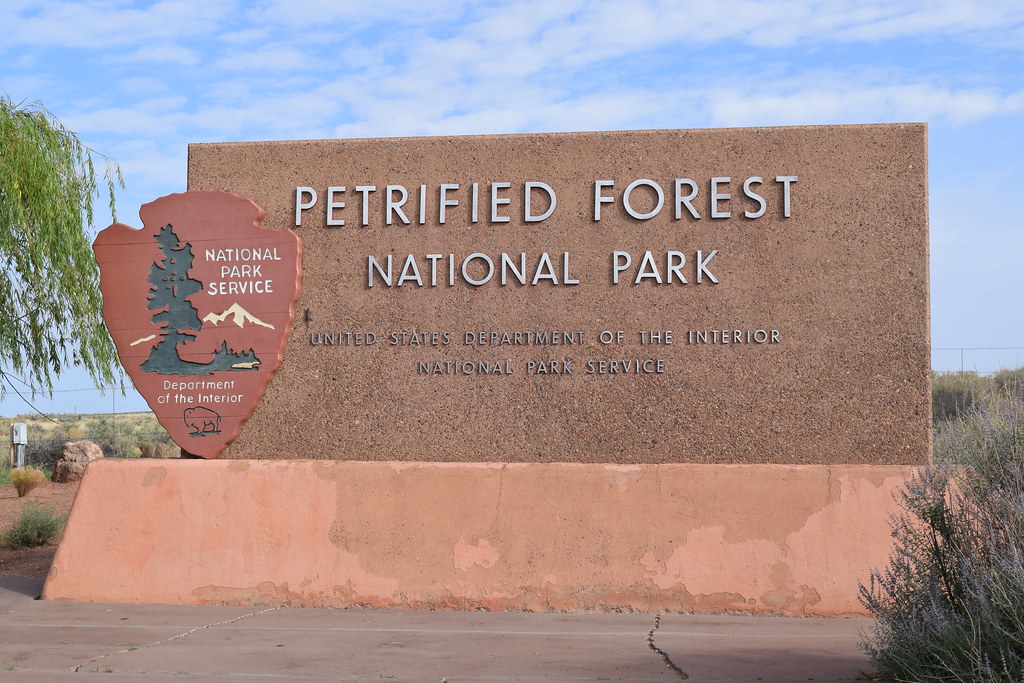 The Painted Desert Inn was initially built using petrified wood and local stone by Hurbert David Lore. He claimed the land in 1924 using the Homestead Act and opened it as Stone Tree House Inn offering meals and tiny rooms. Over the years the building deteriorated, then the 1930s it was in poor condition when the Park Service purchased the property. Redesigned by Lyle Bennett, in the Pueblo Revival Style, the Inn was rebuilt by the Civilian Conservation Corps. They used ponderous pine for the beams, designed punched tin lighting fixtures and built furniture in the southwestern style. Finally, the Inn’s exterior was stuccoed. It reopened in 1940 to offer meals, and rooms to travelers on Route 66 but closed again in 1942 due to WWII. In the late 1940s, the Fred Harvey Company (think Harvey Girls) again redesigned the Inn adding murals of Hopi design to the walls and operated it until the late 1950s. It is now a visitor center with local craftspeople displaying their wares.
The day we visited a young Navajo man, and his sister and grandmother were there. He told his father had been a Navajo Ranger and was interviewed by Tony Hillerman for his Joe Leaphorn/Jim Chee mysteries. 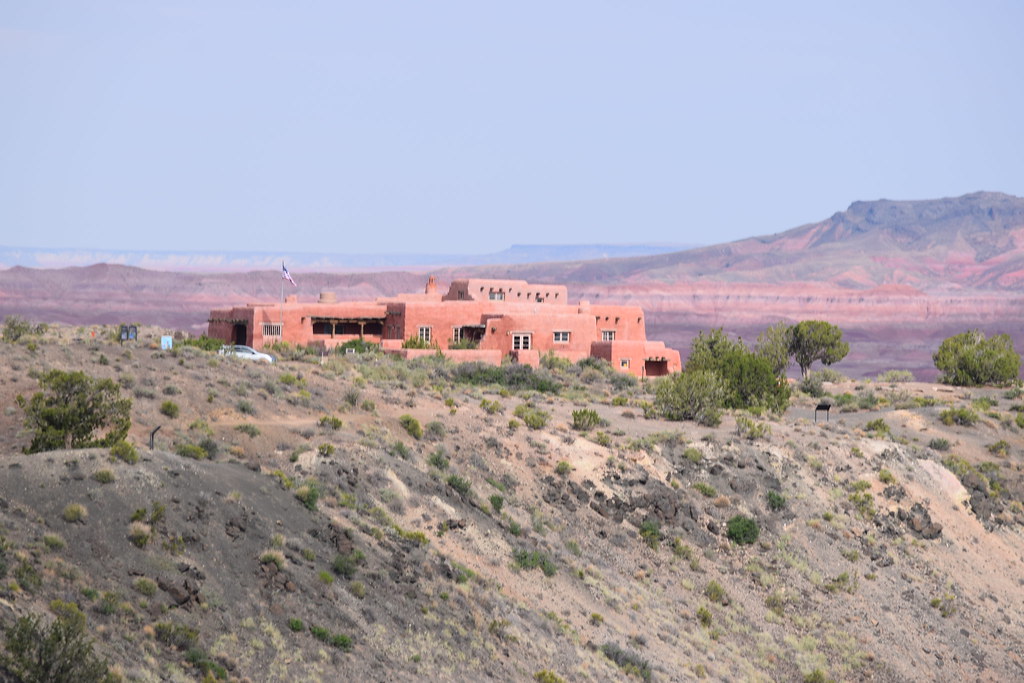