Wednesday was a travel day, from Post Falls ID to St Regis MT a distance of about 100 miles across Lookout Pass in the Coeur d’Alene Mountains of the Bitterroot Range at 4,725’. The day was cold and overcast but the scenery was still magnificent as we followed the St Regis River between the soaring mountains. Nugget Campground in St Regis with a 9.5 rating from Good Sam looked like a good place to call home for a few days. It meets all of our expectations, 50 acres with numerous trails the campground is meticulously kept. The neighbors are friendly its location is nice for some side trips as well as just lazing around.
As usual, I was up at 6:00 AM and in my window seat with a pot of coffee. I hoped to see a few neighbors out and about. Sure enough, a small flock of wild turkeys soon wondered down the road. I attempted a picture through the windshield but it was not very good.
Our adventure today was the St Regis-Paradise Scenic Byway. Leaving the campground we went north on MT 123 following the course of the Clark Fork River. It is a beautiful broad river coursing around wide bends, across strewn rocks, narrowing into swift-flowing rapids. The sun sparkled on its surface. 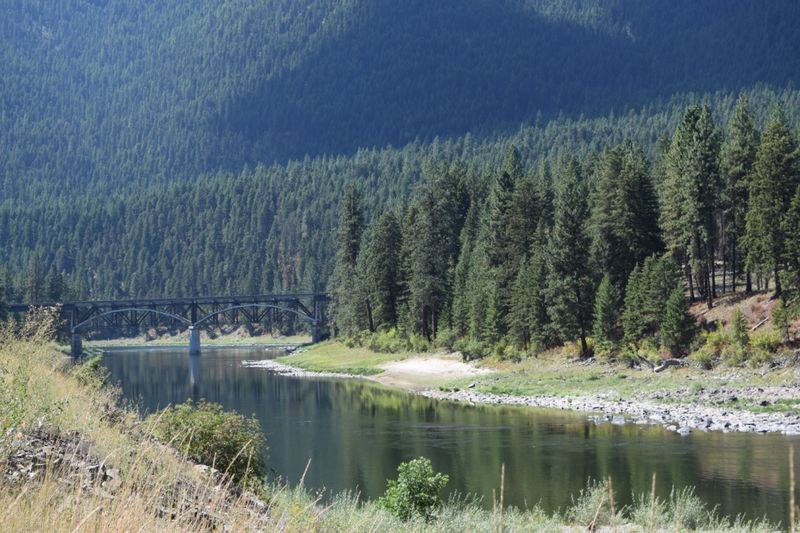 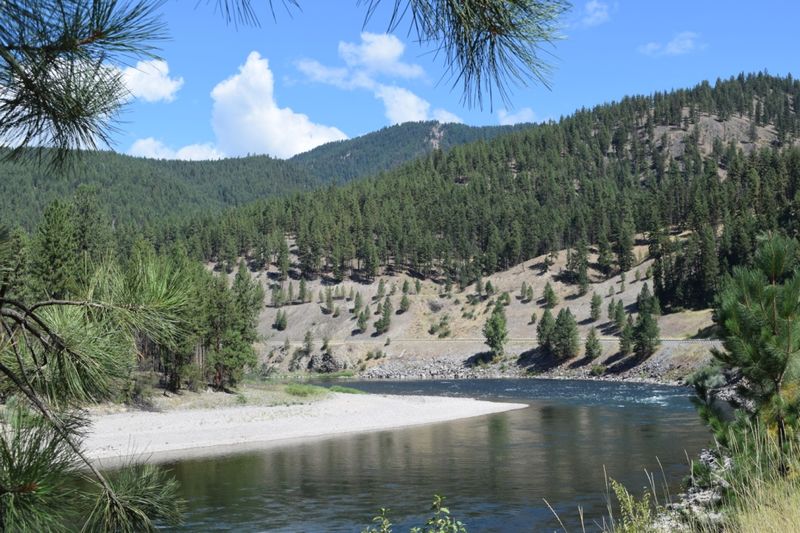 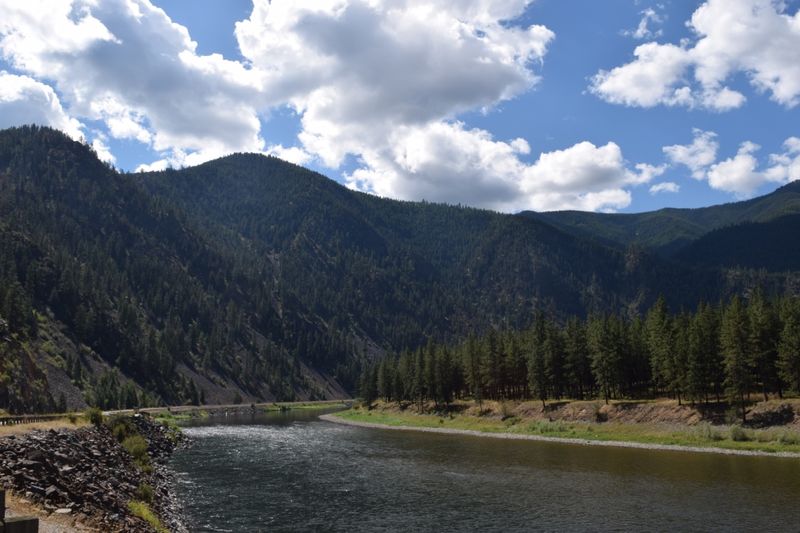 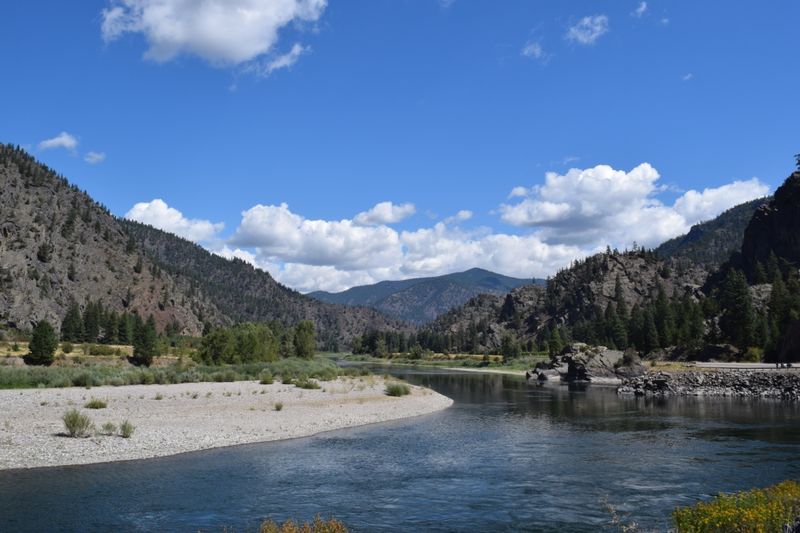 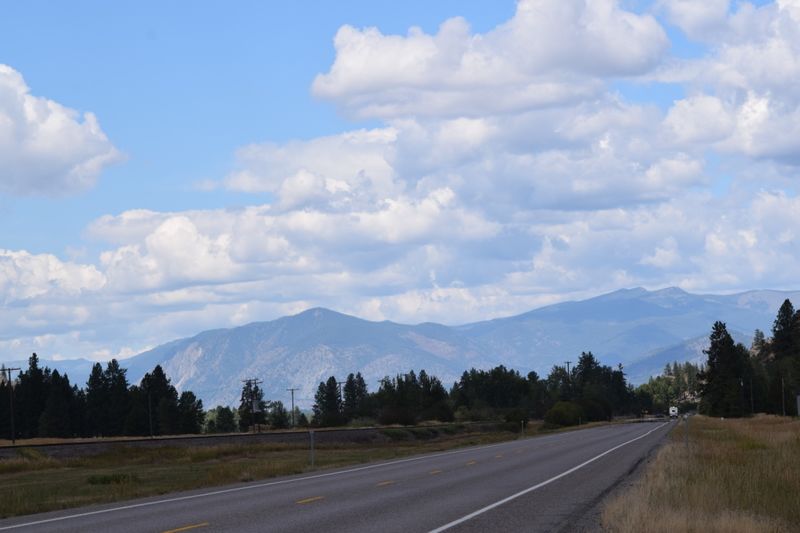 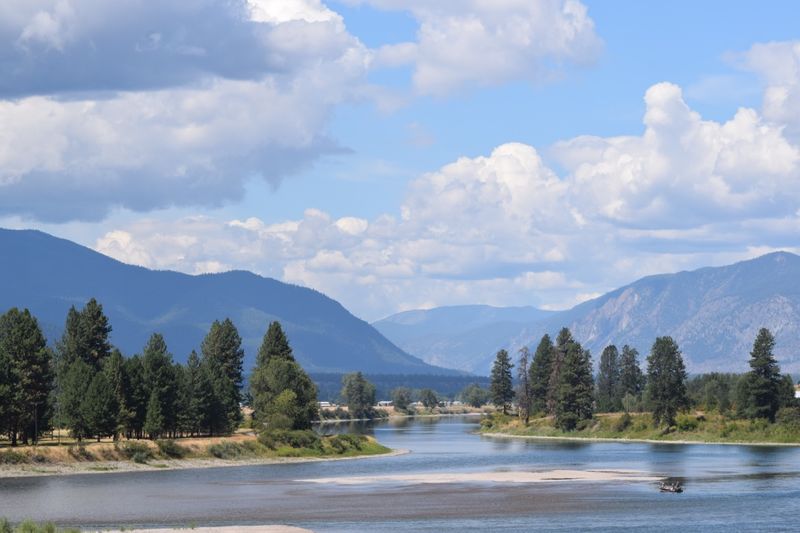 Taking a stop in Paradise to browse in a second-hand store, I snagged a good buy on a 1950s Terri Lee doll. Tom was undecided about an old Snap-on Torque wrench and left without it. We now were driving west toward Thompson Falls an area know for Big Horn Sheep. The highway continued along the Clark Fork with the mountains rising higher and higher on either side the views were spectacular! Just before Thompson Falls, we found our quary, a small flock of Big Horns, 4 females and one lamb, no ram, though. We were still amazed to see then right by the road. 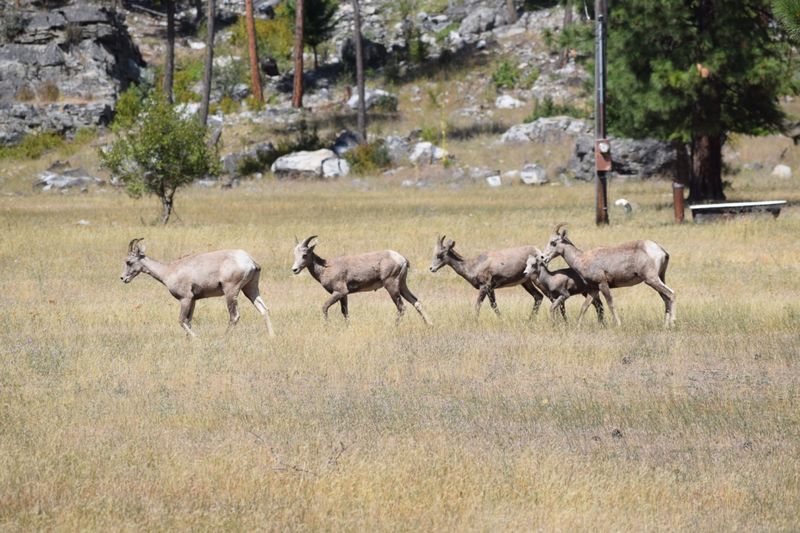 Hoping still to see a ram we went on to a supposed viewing area. Well, no sheep but the deer were everywhere. First, we spied two fawns eating apples in a front garden, then a few older deer in a field, three, a Y buck, a yearly buck and a small doe under a porch and finally a big doe laying in the high school baseball field. Quite a place! 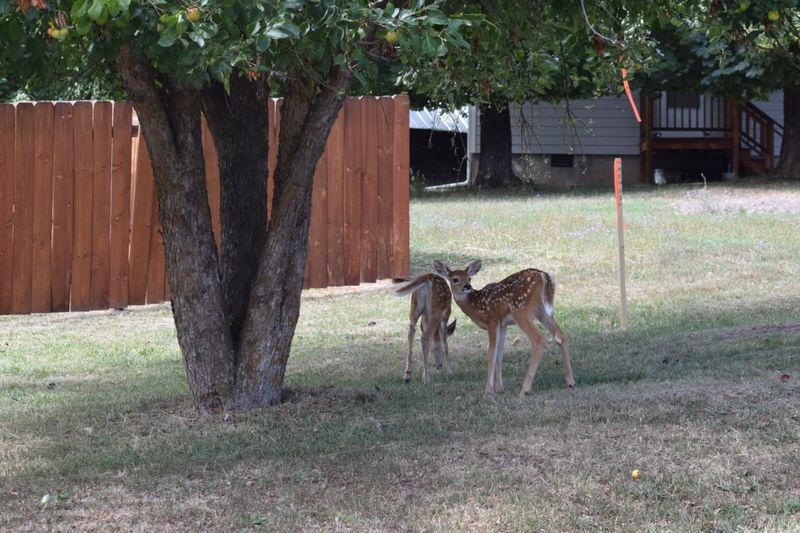 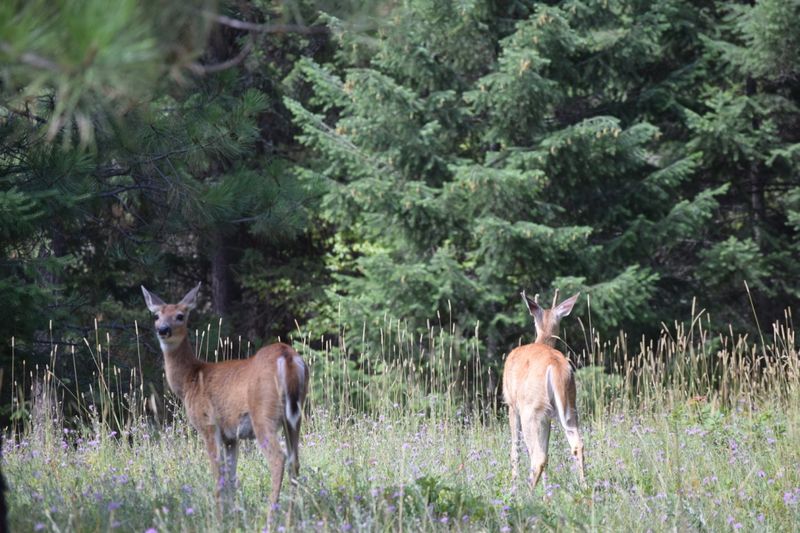 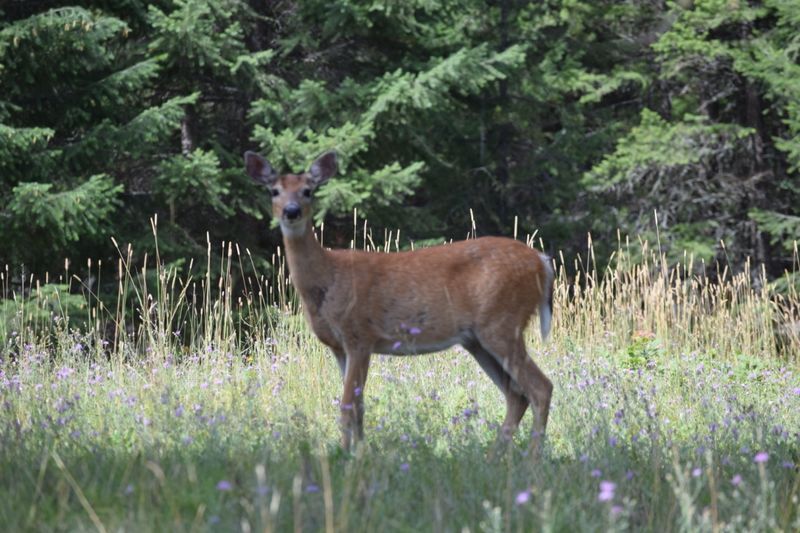 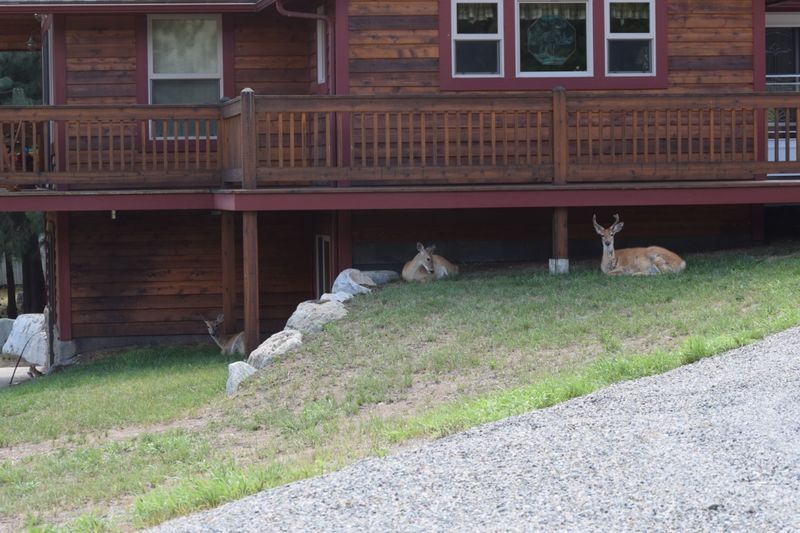 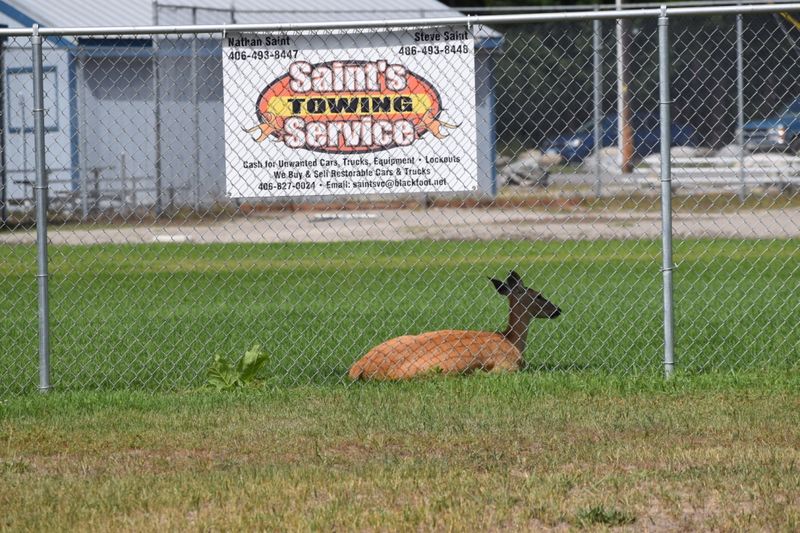 Our trip back to the RV was just as beautiful as the trip out. 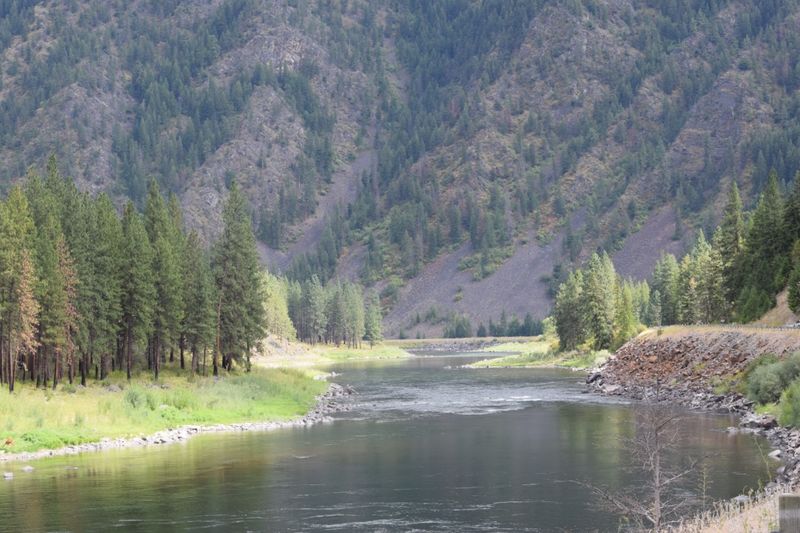 But where is Brad Pitt?