The Last Great Battle of the Indian Wars

The history of the United States is one of conflict between the White Europeans and the Native Americans. One battle stands out among them “The Battle of the Little Big Horn". We have all heard the stories of how Custer, trapped by his own arrogance, was annihilated by the combined forces of the Sioux, Cheyanne, and Arapahoe. Yesterday Tom and I visited the battle site a National Memorial dedicated to the memory of the soldiers and five tribes involved in this conflict.
Situated on the Crow Reservation, the battlefield memorial is laid out along a five-mile road know as Battle Ridge where the heart of the conflict took place. Entering the park to the right of the entrance is Custer National Cemetery. The final resting place for US soldiers from the Indian Wars to Vietnam, however, none of the soldiers from this battle are buried here. As the western forts, built to defend against the Natives, were closed soldiers and civilians buried at those sites were moved here. 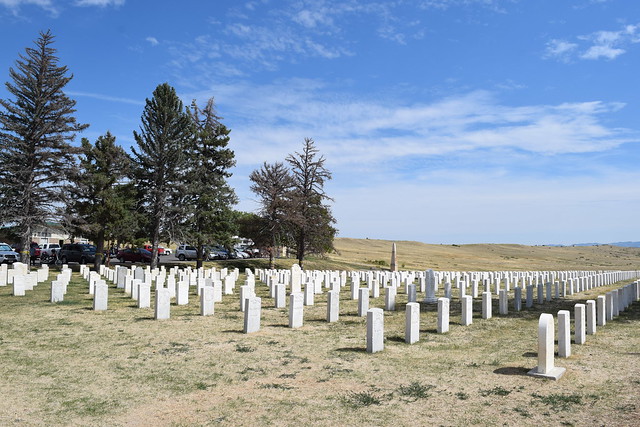 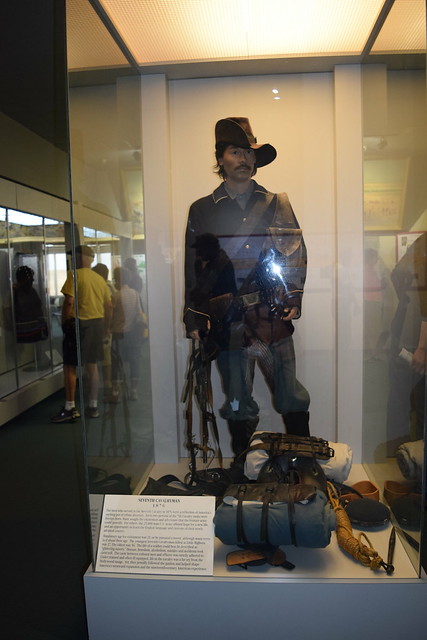 The visitor’s center has a nice museum, movie and a gift shop offering some of the many of the books written about the battle in addition to the usual souvenirs. After the movie, we moved outside to attend a ranger talk on the history of the monument. Then took the bus tour offered by the (Opsáalooke) Crow Tribe. ($6.00) Only the National Cemetery, visitor’s center and a small portion of the battle ridge are inside the memorial grounds, the remainder is on Crow land. We had a great tour guide, Rusty, a young Crow about 19, who gave an informative and animated presentation. As we passed onto Crow land, he explained that it was his grandfather’s land where he raises rodeo broncs under the Real Bird name. Many of his horses were seen along the road. Rusty also warned us several times that: "this is not Yellowstone, do not pet the local wildlife…Rattlesnakes". I was careful to listen to this warning! 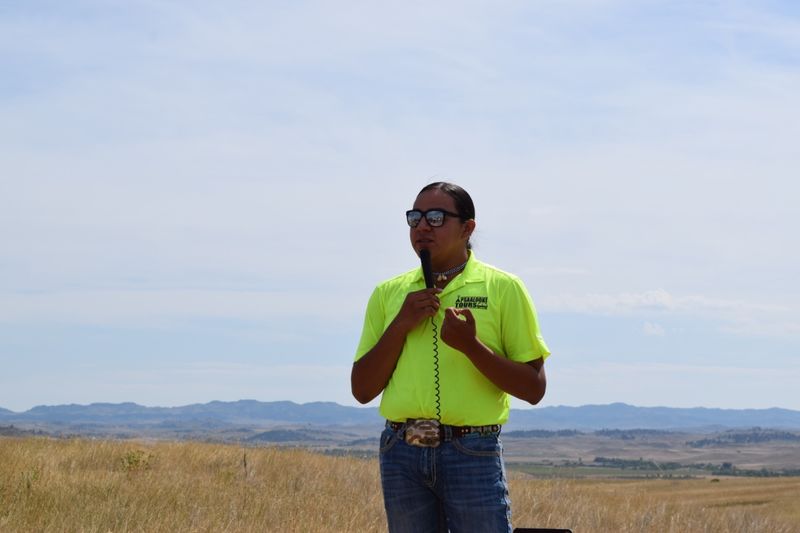 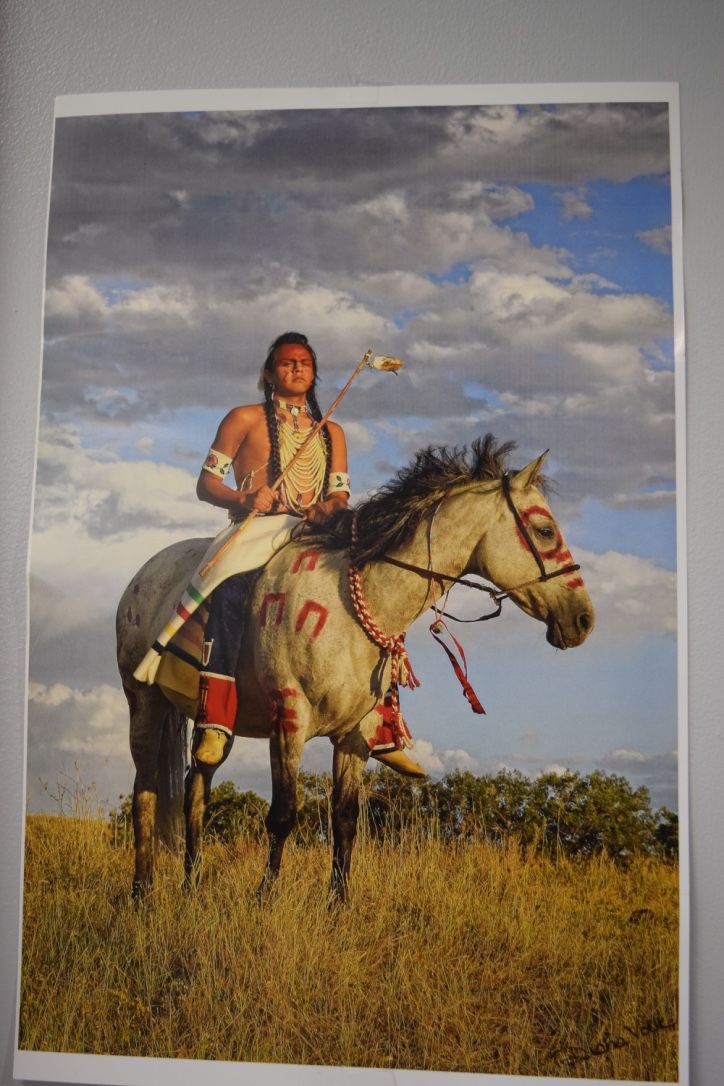 Rusty as he appeared in The Revenant
As you look at the pictures, you will see Tombstones scattered across the fields, the white ones mark the places where soldiers fell and the red where Native Americans fell. There are only a few red markers because the Indians removed all of their dead at the end of the battle. The soldiers were buried two days after the battle by Reno and Benteen’s men and the troops of Generals Gibbon & Terry. Although efforts were made to identify each man, most of the markers say only that a Soldier of the 7th Calvary died here. One fact that stood out, many of the men who die here were very young, barely in their 20s and close to half of them were recent immigrants, primarily from Germany and Ireland. Some could not even speak English. 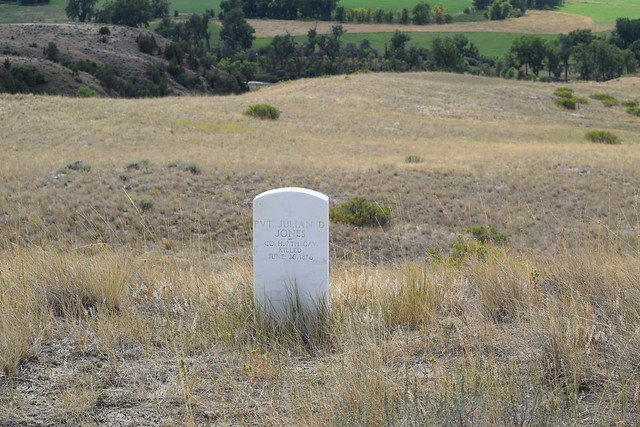 There are two major monuments, the stone monument that marks “Last Stand Hill" where Custer met his end. Under this monument lie the remains of the enlisted men. It overlooks the markers for Custer and the final group of men who died on that hill. The second recognizes the five tribes of Native Americans who fought here: The Sioux, Cheyenne, Arapahoe, Crow, and Arikara. 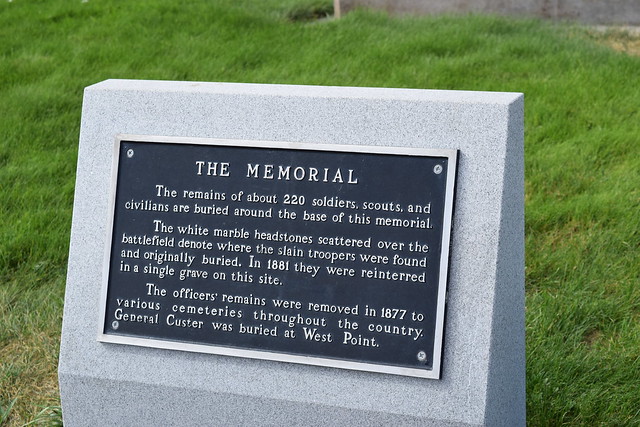 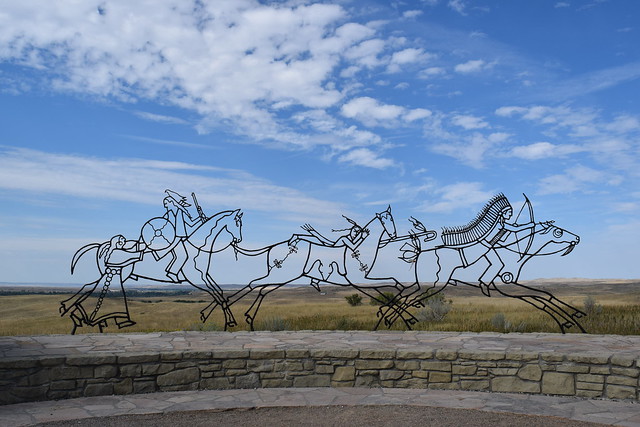 Tom and I remained at the Battle Memorial for about 5 hours, it was fascinating to visit a place I have read about so often.
If you would like to know more about the battle, I would recommend: A Terrible Glory: Custer and the Little Big Horn, the Last Great Battle of the American West by James Donovan. I read it earlier this summer and feel he gives a balanced account of the events leading up to and including the battle. 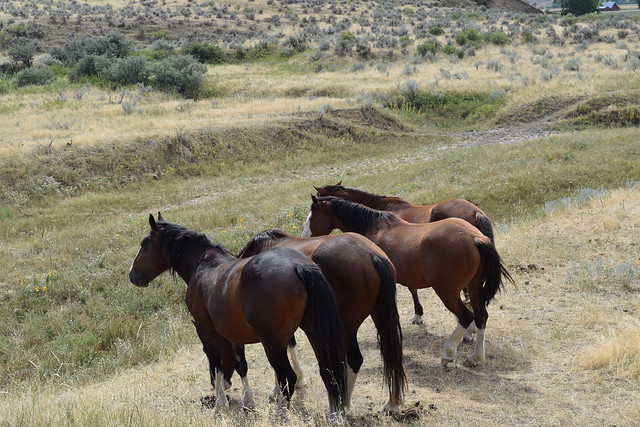