We have been through the desert on a horse with no name...

Well, no horse but certainly through the desert, the Mojave Desert that is. With 350 miles from Las Vegas to San Diego and three mountain passes to cross we decided to divide our journey into two days, from Vegas to Barstow, CA, then Barstow to San Diego all on I 15. The leg to Barstow included the Mountain Pass and Holleran Summitt, both long slogs up then down the mountain. Each had a few 6% grades to contend with, but Tom, of course, held the MH on a steady course. When we arrived in Barstow it was so hot Gracie could not walk on the gravel, we had to put her little boots on to protect her feet. Even we could feel the heat coming through our shoes. A retreat to the semi-airconditioned RV was a must. With Peggy Sue’s diner just down the road, cooking seemed out of the question. A root beer float and a pastrami sandwich with a side salad were much appreciated as were the many signed photos of old TV and movie stars.
Day two of our escape from the heat lead us through Apple Valley, the home of Roy Rogers and Dale Evens. (Roy was an Ohio boy who struck it big as a singing cowboy in the Movies and on TV.) The real test was Cajon Pass with a 12 mile downhill run varying from a 4 to 6% grade. Again Tom kept us rolling along. We arrived at the San Diego RV Resort in La Masa to cooler temperatures and a lovely breeze. It was wonderful to just relax on the patio.
Our Chevy Colorado needed new shoes, I mean new tires. Tom took it off the Firestone store to fit her up on Monday morning. I took the day to do laundry, and clean the RV of dust and sand from the last 5 weeks. For our evening's entertainment Old Town San Diego called us. We strolled through the shops, admired the old buildings and stopped for dinner. Tom had his usual Hamburger, and I had the most delicious shredded chicken Tacos. They were absolutely stuffed with chicken, topped with shredded cabbage, and some pico on the side. One was a much as I could eat. So delicious!
The week ahead was stuffed with must do San Diego activities. First on our list was Balboa Park, San Diego’s centerpiece. The home for the 1915 Panama California Exposition, the buildings were designed in the Mission Revival Style, with domes, turrets, decorative plaster, and tile work. All of the surviving buildings now house various museums, most have been restored to their original beauty. Our first day, we took Gracie, we all needed the exercise. We all enjoyed the various gardens and fountains, Gracie especially enjoyed the attention she received for all of the little kids. After walking all over the park, we chose the Automotive Museum and the Flower exhibit for our second day. The Auto museum had a great Steam-punk exhibit, very unusual vehicles, plus some great old cars and motorcycles. They had an old Cadillac that looked as big as our Motorhome. Lunch was at Panama 66, I had the BLAT, bacon, lettuce, and tomato and Tom had a burger, the sandwiches were excellent. Best of all was the fresh squeezed Lemonade, so good, and they brought refills. After lunch we went to the flower exhibit, housed in a vast lath work building. The plantings were all beautiful, but the orchids were exquisite. 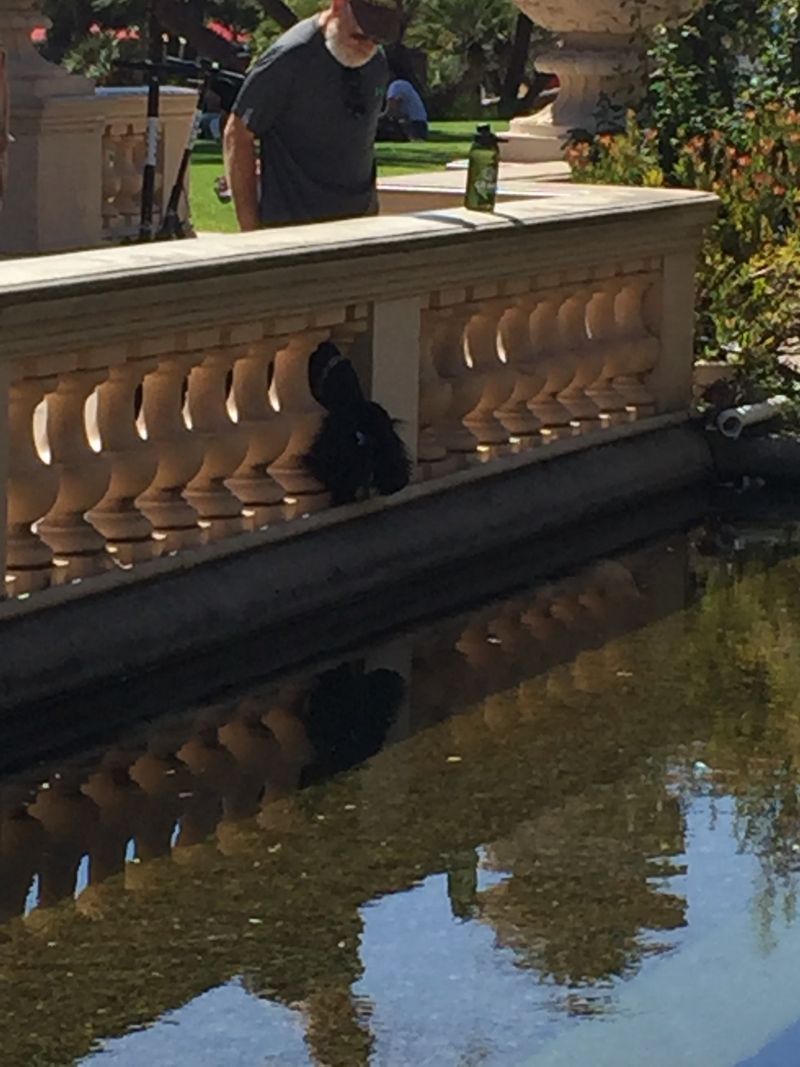 Gracie and Tom watching the fish. 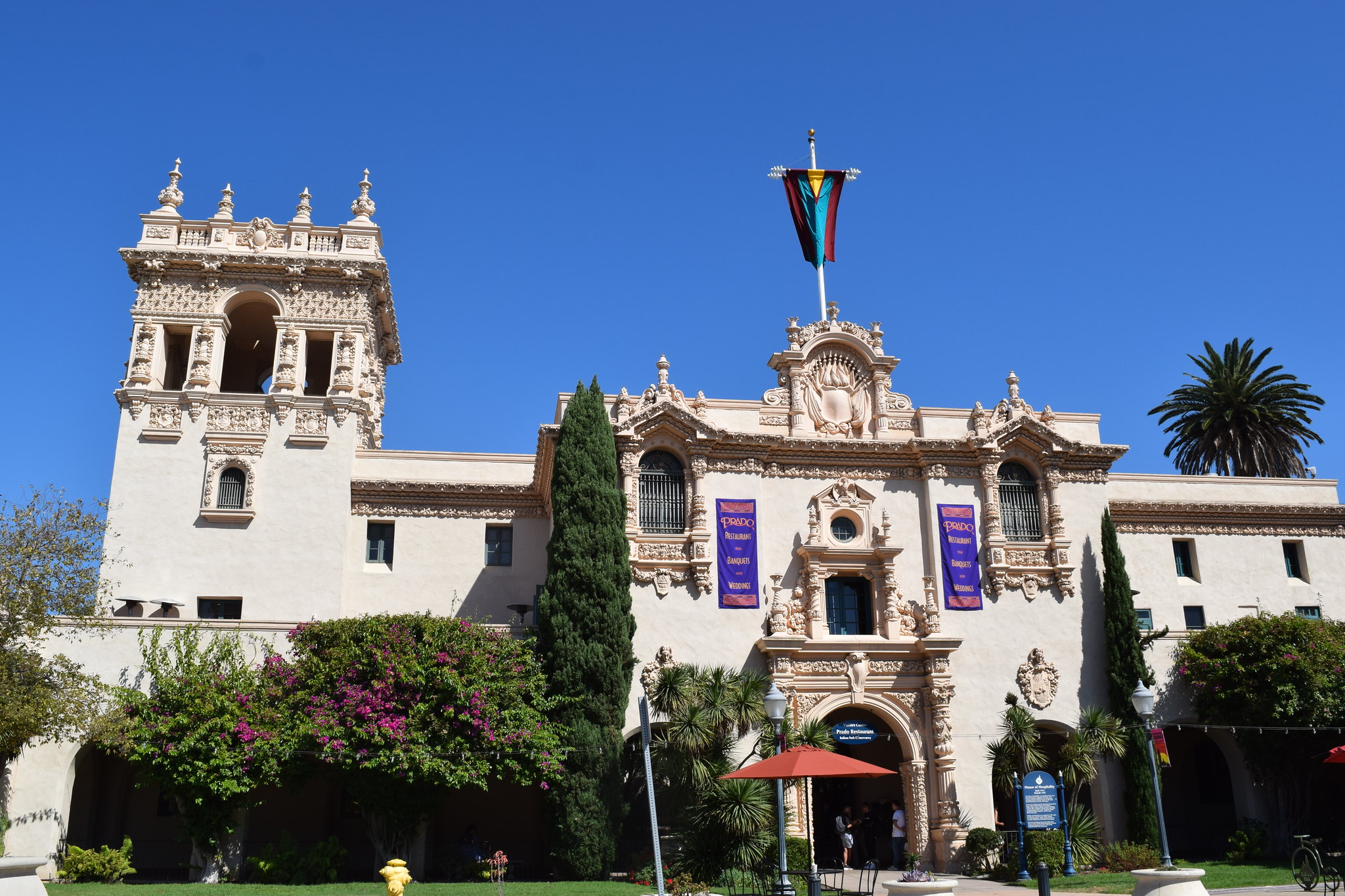 Now for the crown of Balboa Park, the San Diego Zoo. Tom and I both love zoos so this was a must stop for us. We were not however prepared for its size. I probably did not mention that Balboa Park is on top of a mesa, the zoo winds it way up and down the sides of the mesa which makes it very scenic but also a challenge for us oldsters. With the help of a docent, we were able to go down the steeps grades and stay on the flat as much as possible. There was so much to see, we managed to see most of it, but we did miss a few critters. Of course, my favorites were the Pandas, we arrived at their enclosure as the male was enjoying a bit of lunch. The polar bears were also entertaining, wrestling around in their big pool. We had a delightful day. 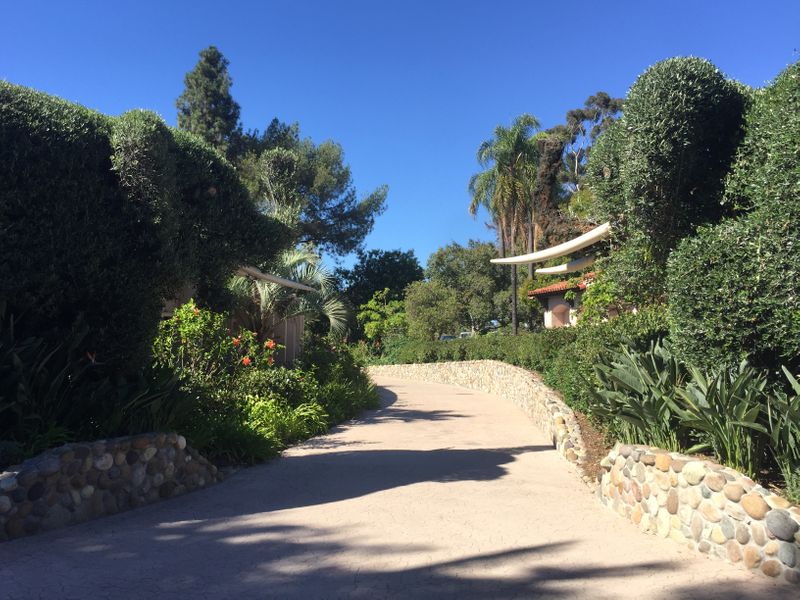 Entrance to the San Diego Zoo 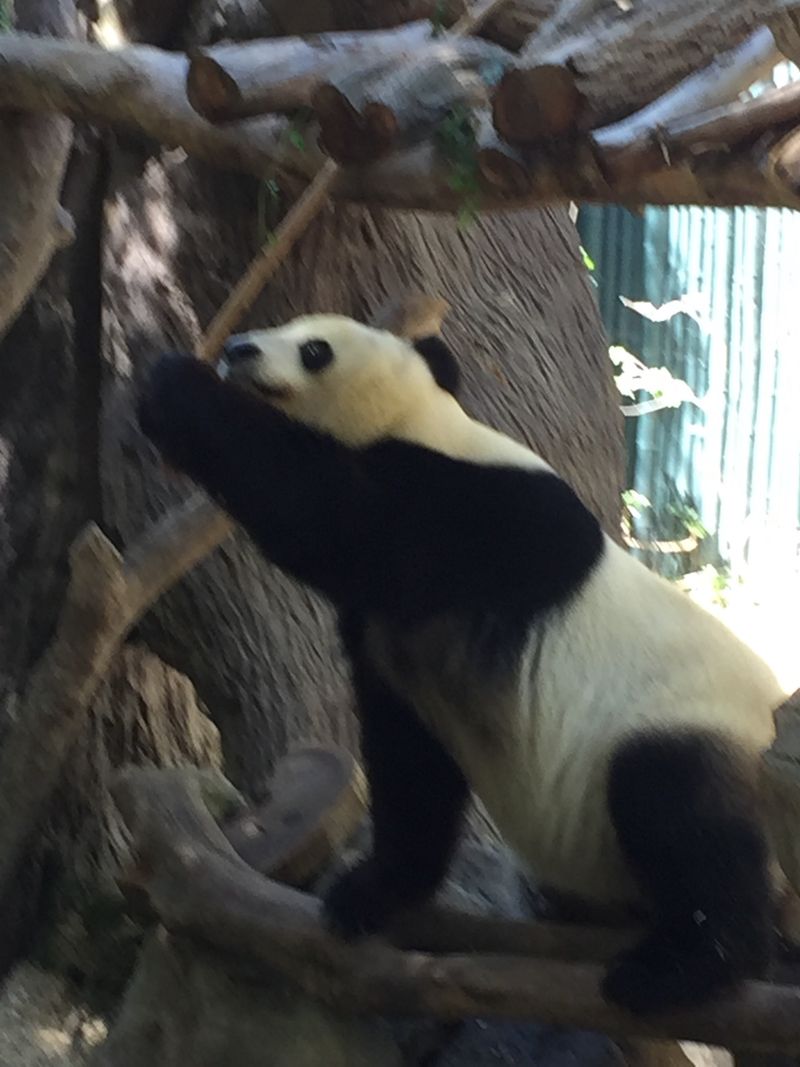 Panda Bear
Still exhausted from our day at the zoo but not wanting to just sit around the RV park we drove off to see the historic missions and the Pacific coast. The Basilica San Diego de Alcala was the first mission founded by Father Junipero Serra in 1769. Continuing up Historic 101 we passed through La Jolla, Encinitas, Carlsbad, and Oceanside to Mission San Luis Rey. Along the way, we were treated to views of the fabulous California Beaches. On our return trip, we stopped in Encinitas at The Fish Shop, where we enjoy delicious fish tacos, calamari, and shrimp on their DOG-Friendly patio. A great day. 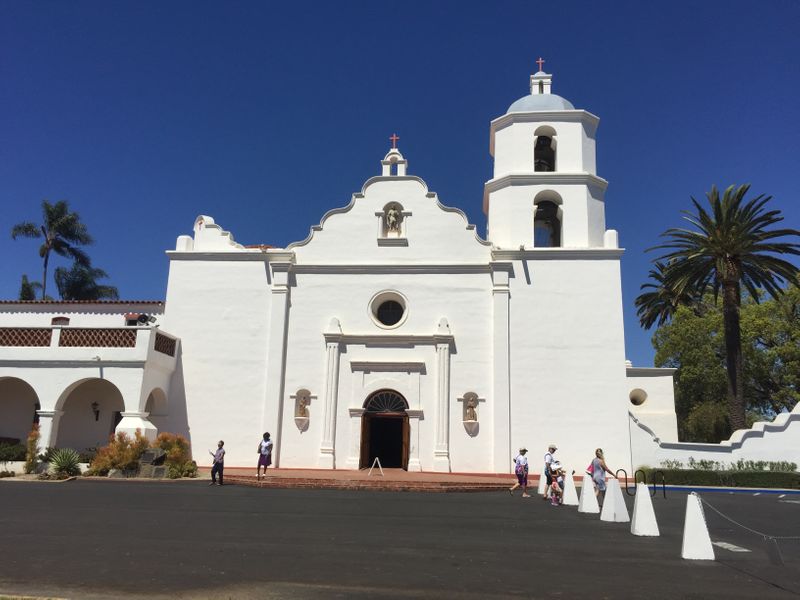 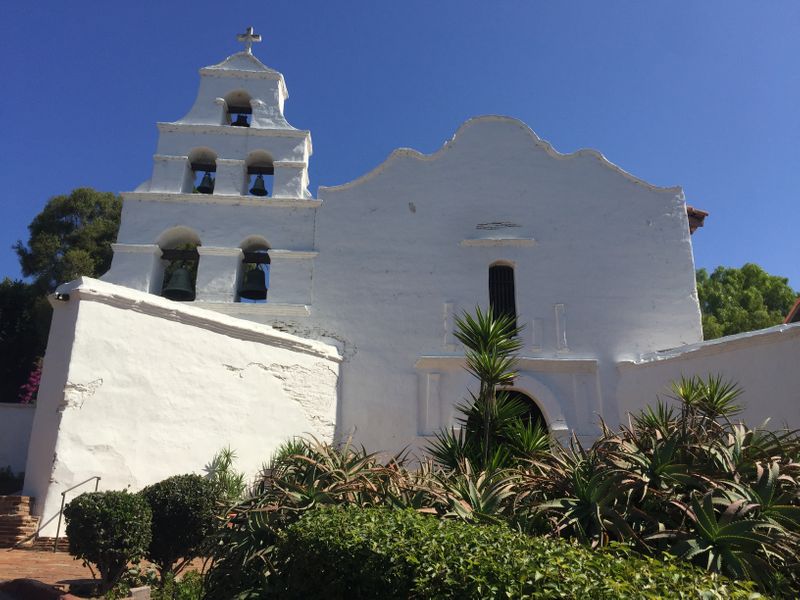 Mission San Diego de Alcala
A drive over the Coronado Bridge is a must do while visiting, besides how else will you see how the 1% lives. Believe me, they live well. The city is lovely with many old cottages, a lovely “main street" with tons of small shops and restaurants. The Hotel del Coronado is a gorgeous historic inn set on the ocean’s shore. We saw a few small houses, less than 1000 sq. ft. that were listed at over $600,000. Enough of that, it is a beautiful community, a fun place to hang out for an afternoon and evening.
We spent a day and a half on the USS Midway. Named for the Battle of Midway Island, the Midway was commissioned one week after the end of World War II and served as the Persian Gulf Flag Ship in Desert Storm. The docents were excellent, most were retired Navy airmen with great stories to tell and knowledge of the workings of an aircraft carrier. Next door to the Midway was a lovely little park with a huge statue depicting the sailor kissing the nurse to celebrate the end of WWII. There was also an excellent restaurant, the First Market, with balcony tables overlooking the bay. 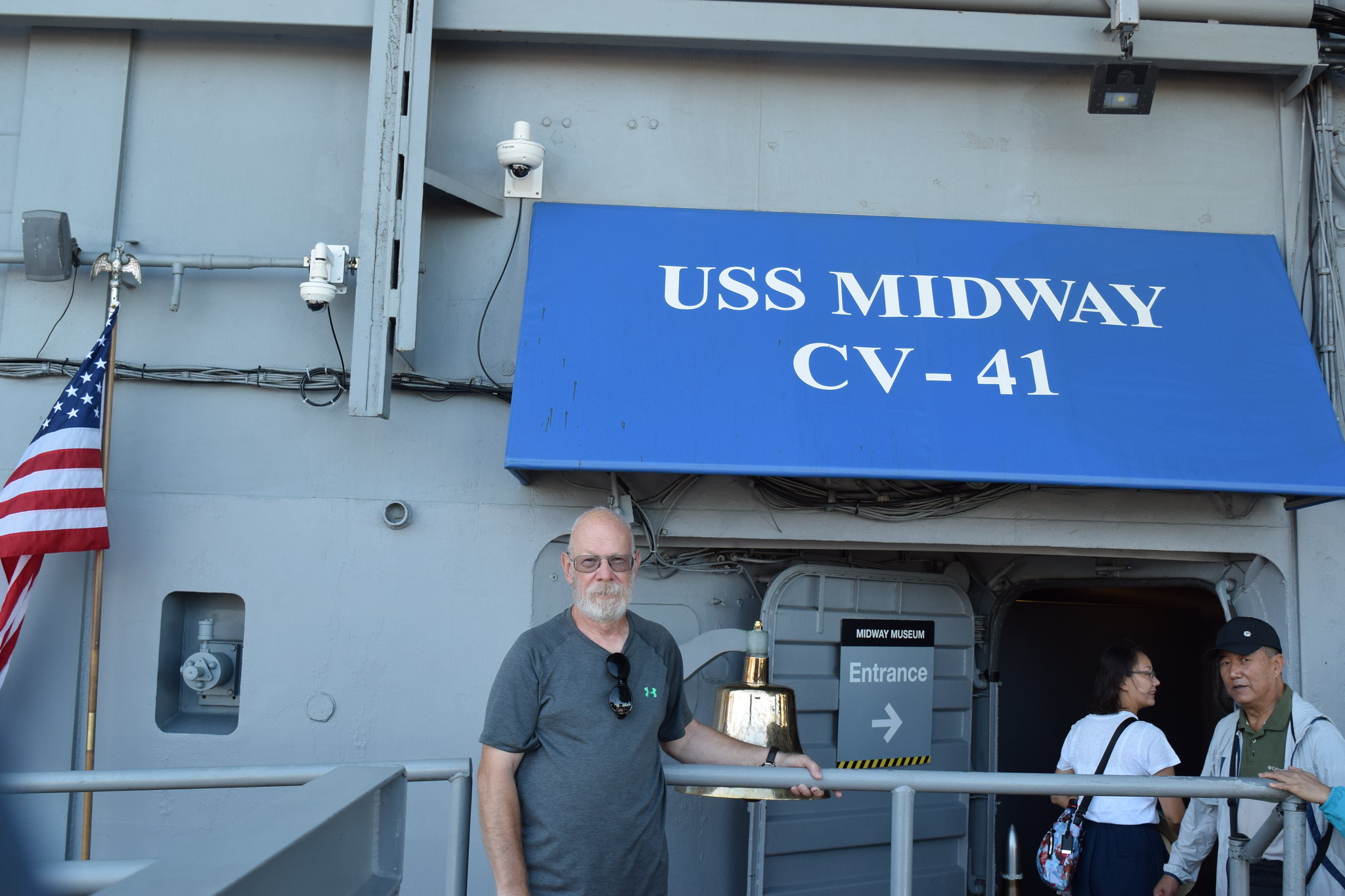 Our last big venture was to Cabrillo National Monument on Loma Point. The monument commemorating the landing of the Spanish as the first Europeans to visit the harbor. Beautiful views, a lovely old lighthouse and an exhilarating hike along the sea cliffs. Another great day. 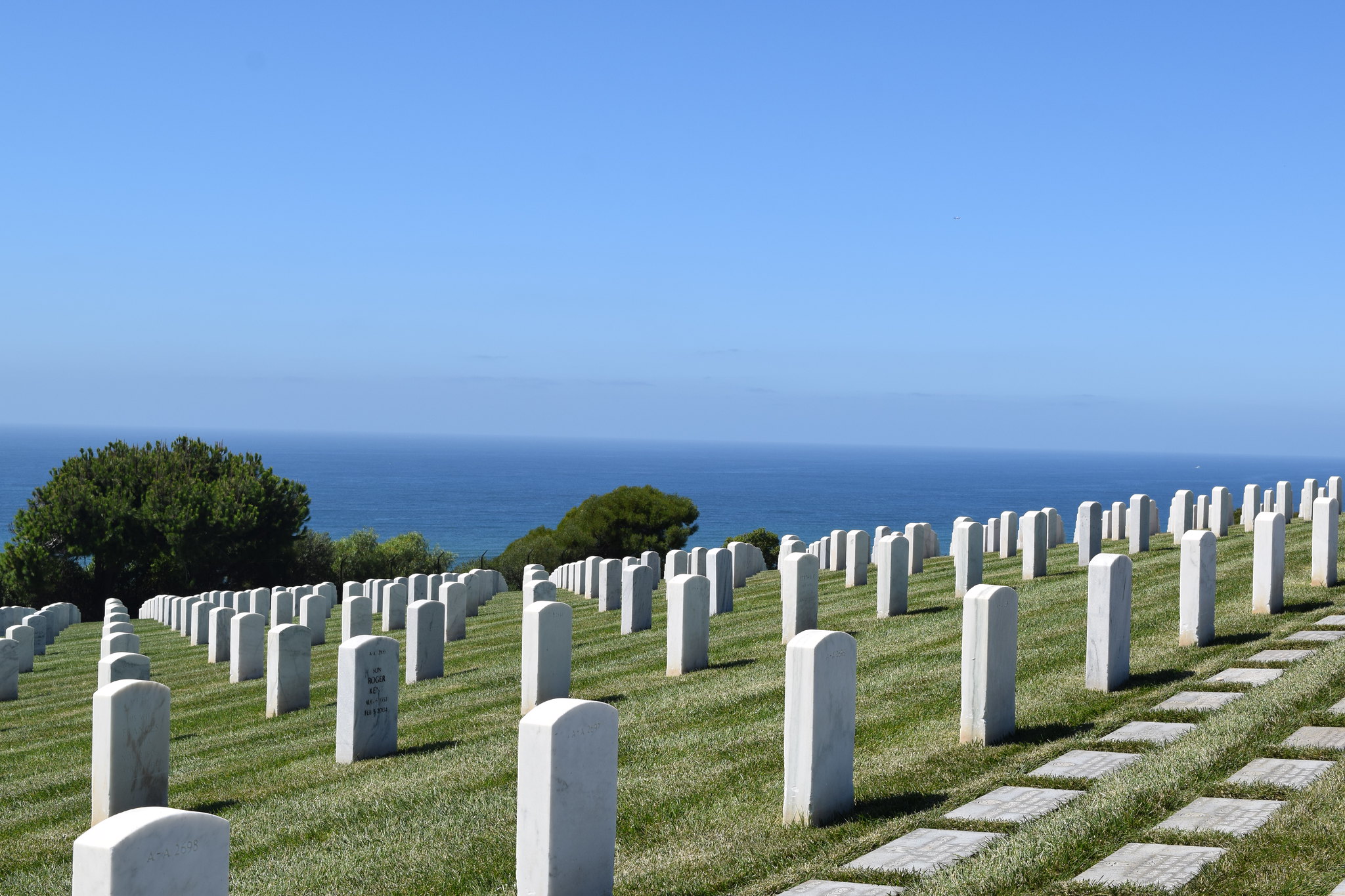 Not to deprive Gracie of some fun, we took her to Dog Beach in the Ocean Beach part of San Diego. We all had great fun, a wide open beach area to run in and out of the waves retrieving the Ball, chasing other doggies up and down the beach until exhaustion. After the beach, we drove down Sunset Cliffs Boulevard through Ocean Beach to admire the spectacular ocean views and the fabulous homes overlooking the cliffs.
We left San Diego on Sunday, September 23, heading to Lone Pine, CA, once again across the desert.